Trump Makes It Tough to be Sympathetic 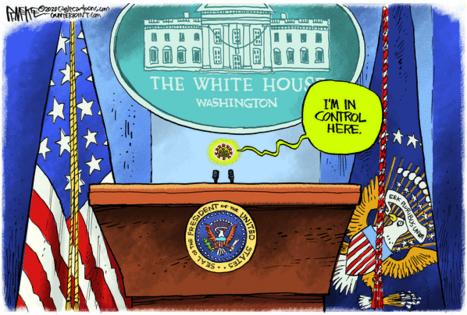 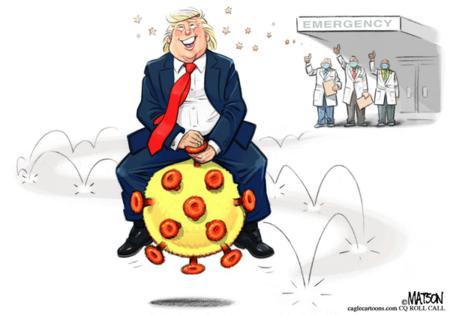 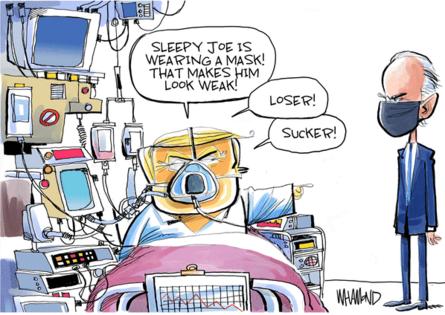 We can probably agree that falling ill with a dire disease is the one thing that could’ve made Donald Trump a human being worthy of universal sympathy.

“Nobody should have to suffer,” “thoughts and prayers,” the whole nine yards. We teach our kids to be compassionate toward others, so the least we can do is practice what we preach.

But boy oh boy, does this guy make it tough to be nice.

Perhaps we should simply stipulate that the sympathy we extend comes with lots of caveats. Because Trump doesn’t deserve anything more - not after everything he has done, and continues to do. And if holding back on sympathy makes you feel guilty, cut yourself a break, because you have plenty of company.

In a new national poll, a landslide 63 percent of Americans - including 66 percent of the high-turnout typically Republican seniors - say that Trump, has acted irresponsibly “in handling the risk of coronavirus infection to the people who have been around him.”

And Joe Biden rightly concurs. In Miami Monday night he said: “Anybody who contracts the virus by essentially saying masks don’t matter, social distancing doesn’t matter, I think is responsible for what happens to them.”

That works for me.

I’m not saying that it’s appropriate to dance with joy at the prospect of Trump suffering or dying. That kind of behavior is low rent, and we’ve seen too much of it over the years.

Nevertheless, it feels appropriate, and morally just, to dial back the empathy for a narcissistic madman who warrants the name Typhoid Donny.

Climbing into a hermetically sealed SUV for a joy ride around Walter Reed, inches away from Secret Service agents who would prefer to remain healthy, for the sole purpose of guzzling cultist adulation was - to put it as nicely as possible - insane.

Flying back to the White House with his deadly infection, and turning our building into a hot zone was - to put it as nicely as possible - the quintessence of idiocy. As one White House source tells Axios, “It’s insane that he would return to the White House and jeopardize his staff’s health when we are still learning of new cases among senior staff. This place is a cesspool. He (has) exposed thousands of his own staff and supporters to a deadly virus. He has kept us in the dark, and now our spouses and kids have to pay the price. It’s just selfish.”

And insulting our intelligence is hardly the way to engender sympathy. His tweet Monday (“Don’t be afraid of Covid. Don’t let it dominate your life.”) is the kind of advice we’ve come to expect from the leader of a death-cult party. COVID-19 already dominates the lives of the American families grieving the loss of 210,000 loved ones and those who’ve survived the worst of the illness but face a lifetime of impaired health.

But hey, folks, “don’t be afraid of Covid,” because if you’re stricken, perhaps you too can fly Marine One to a four-room hospital suite for experimental treatments and free health care.

So I can only speak for myself. I want him alive and sentient four weeks from now so that he might witness and absorb an election humiliation, the kind of cosmic reckoning he has managed to dodge his entire irresponsible life.