Nikes On a Wire 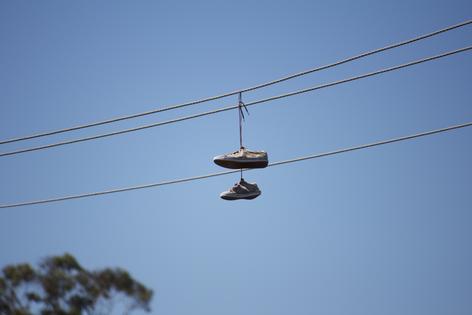 I was walking home from my neighbor's house. They'd just had a piano recital and I was still full of music when I saw the pair of tennis shoes flung over the telephone wire that crosses my street - instantly redefining, at least for me, this moment, this piece of earth and sky. Oh my God. I don't believe it.

In front of my house?

Every now and then I see a pair of tennis shoes flung over a telephone wire - that wire stretching through a nearby McDonald's parking lot, for instance - and every time I do, I think about a 12-year-old boy named Jose, who shoved a bit of reality in my face 20 or so years ago. He did so as a student of mine.

I was a volunteer writing teacher at the time. This was part of my decade-long struggle with the Chicago Public Schools, which my daughter attended. One day, when she was in third grade - this is when the school system begins the farce known as standardized testing, and "education" started to mean teaching to the test - she came home angrily and declared: "Dad, I hate writing!"

Writing had become nothing more than spelling and grammar, plus an opening sentence, yada yada, conclusion. The writer's actual knowledge and life experiences - the writer's voice, the writer's soul - were irrelevant. Writing was not about saying something. All that mattered was conforming to the test format. Students' words were emptied of meaning. That no longer mattered. In fact, it was a nuisance, since meaning was determined by the writer herself and often went off in its own direction; it couldn't easily be reduced to a number.

No wonder she hated writing!

I was beside myself with frustration. I believed in the public schools. But their (politically forced) conformity to standardized testing - good numbers meant adequate funding - was just plain wrong. As a writer myself, there was no way - no way! - I could allow my own kid to be robbed of her developing writer's voice.

This was a long struggle, but the beginning was here at Franklin Elementary School. I wound up having a conversation with the school's principal, who actually listened to my concerns and got my point. While she had no power to change the system, she suggested, if I was interested, that I could do some teaching at the school. I wasn't working full time at that point and had some free time in my week, so she arranged with one of the teachers for me to work with a small group of kids once a week.

They are both Democrats. They both wanted to be president someday. They were both devoted to their families. But, aside from that, as politicians, Barack Obama and Joe Biden differ in almost every way possible.

It may be the most explosive charge ever leveled by a president of the United States against political opponents. And it was especially shocking coming from Joe Biden, who campaigned on his capacity to reach across the ...Read More

Even in the halls of Congress, where the decibel level’s always high, seldom has such squawking been heard as last week, when every single Republican joined a chorus of outrage over President Biden’s announcement that ...Read More

There’ve been so many conflicting reports, charges, and countercharges, it’s hard to know what to think about the FBI’s search of Donald Trump’s Mar-a-Lago estate on Aug. 8. So, this week, let’s take time to sort...Read More

For the last 12 months, Democrats, who wallow in a perpetual state of gloom anyway, have been almost catatonic about the midterm elections. Most Democrats were convinced they would overwhelmingly lose control of the House ...Read More