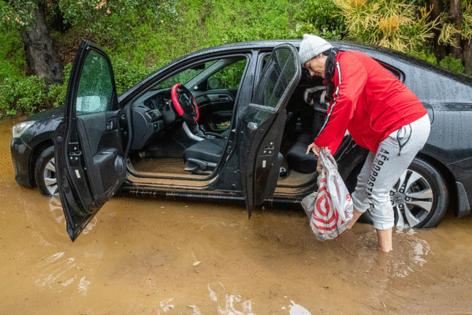 For decades, two climate patterns in the Pacific Ocean have loomed large in predicting weather in California and other parts of the globe. El Niño — a warming of sea-surface temperatures in the tropical Pacific — seemed synonymous with wet winters for Southern California, while La Niña was a heralder of drought.

But the would-be model didn't hold up this winter. Despite La Niña's presence, a robust series of 10 storms brought impressive precipitation across California, spurring floods and landslides, increasing reservoir levels and dumping eye-popping snowfall in the mountains.

The Sierra Nevada has a snowpack of 240% of average for the date, and 126% of where it should be by the start of April. San Francisco was drenched with more than 18 inches of rain since Christmas, posting its wettest 22-day period since 1862. Downtown Los Angeles has logged more than 13 inches of rain since October — more than 90% of its annual average of 14.25 inches.

Though winter isn't over, and a renewed dry spell can't be ruled out, the significant storms have defied expectations of a dry winter.

The forecast in October by the Climate Prediction Center, a division of the National Weather Service, indicated the odds were stacked against the Golden State: a rare third year of La Niña was expected. And California had already recorded its three driest years in the historical record.

The center's seasonal forecast for December, January and February said there were equal chances of a dry or wet season in Northern California. But for Southern California, the agency reported there was a 33% to 50% chance of below-normal precipitation.

"These probabilities are going to be relatively modest ... because that is the state of the science," DeWitt said.

Those subtleties, however, tend to get less attention. Easier to understand was the bottom line, as a center's statement noted: "The greatest chances for drier-than-average conditions are forecast in portions of California," as well as other southern parts of the nation.

Since the tail ...Read More

LOS ANGELES — As California emerges from a two-week bout of deadly atmospheric rivers, a number of climate researchers say the recent storms appear to be typical of the intense, periodic rains the state has experienced ...Read More