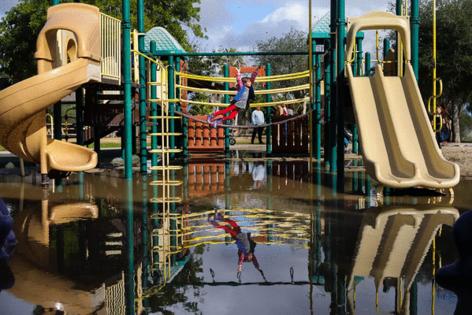 As the skies begin to clear and a relentless series of atmospheric rivers starts to move out, Californians are finally catching a break as they assess the aftermath of weeks of downed trees, landslides and devastating flooding.

River levels are receding in some areas, top climate officials reported in a briefing Monday, and the worst of the rain appears to be over.

One more storm system is forecast to roll through California on Wednesday, said California State Climatologist Mike Anderson, but it won't pack as much of a punch as the previous ones. The rain, which isn't expected to hit farther south than Santa Barbara, appears barely strong enough to qualify as an atmospheric river.

But officials caution the public to remain vigilant. Landslides, sinkholes and other hazards could still strike because the ground has received such a soaking, and tree branches — dried up from years of drought and whiplashed by high winds — remain a deadly hazard.

On Saturday, a woman was struck dead by a falling branch in San Francisco's Golden Gate Park, bringing the total number of storm-related deaths statewide to at least 20.

Flood watches from the National Weather Service remain in effect for some parts of the Bay Area and Central Coast, and a number of rivers in Southern California are forecast to reach close-to-flood levels later this week as excess water makes its way down the watershed.

The twice-annual "king tide," an exceptionally high tide that occurs when the sun, moon and Earth are in gravitational alignment, is also expected to bring high water levels to the coast this weekend.

Across the state, some roads remain so damaged that it will take weeks to clean up and months to repair them.

As evacuees return to their homes and businesses, the full extent of the flood damage will come to light in the coming days.

Gov. Gavin Newsom issued an executive order on Monday to bolster staffing for emergency responses, and President Biden is expected to visit the Central Coast later this week to assess what additional federal support is needed.