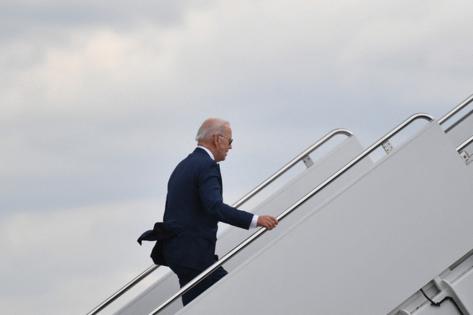 While exact details are not final, Biden does plan to meet with first responders, state and local officials, and communities affected by the devastation from “atmospheric river” storms that have left at least 20 dead. The storms have flooded businesses, homes and roadways, downed trees, caused mudslides and avalanches and prompted widespread evacuations and road closures since the new year.

As a result of the caravan of storms that have swept across parts of the state, Biden last week first issued an emergency declaration for the state, aimed at helping people and local officials coping with the storms.

In the counties that qualified for help, the Federal Emergency Management Agency, the federal department that specializes in disaster relief, can “ identify, mobilize, and provide at its discretion, equipment and resources necessary to alleviate the impacts of the emergency.”

On Sunday, Biden declared a major disaster in three counties. That means the federal government was making disaster assistance available to the state of California to supplement state, local and tribal recovery efforts in the areas affected by severe winter storms, flooding, landslides and mudslides beginning on Dec. 27.

The action made this funding available to those impacted in Merced, Sacramento and Santa Cruz counties.

The aid can include grants for temporary housing and home repairs, low-cost loans to cover uninsured property losses and other programs to help individuals and business owners recover from the effects of the disaster.

After this bout of rain and snow, forecasters are anticipating an easing of winter weather conditions, with cloudy and rainy skies parting for mostly sunshine and dry conditions over the next week.