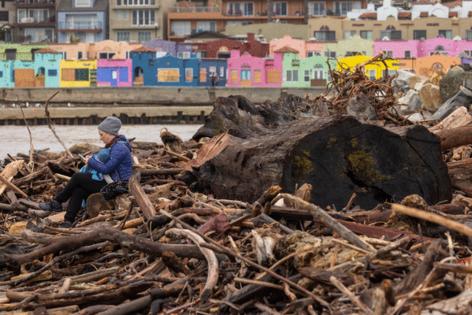 SAN JOSE, Calif. — The Bay Area was doused with yet another hefty overnight storm late Sunday into Monday, but it appears that the downed trees and power outages could have been a parting gift from the historic downpours as mostly bright skies crowd forecasts for the foreseeable future.

National Weather Service 12-hour precipitation totals from 8 p.m. Sunday to 8 a.m. Monday showed healthy amounts of rainfall throughout the region, with most parts of the Bay Area exceeding one inch of rain. Totals include 1.18 inches in San Jose, 1.17 in San Francisco, 1.24 in Walnut Creek and 1.38 in Oakland.

With saturated soils making it easier for trees to fall and clogged drains making way for flooding, there was no shortage of overnight damage from the storms.

In Berkely, a Monday morning mudslide led to a “severe” warning from the Berkeley Police Department, forcing evacuations near Middlefield Road.

“THE SPIRAL BETWEEN WILDCAT CANYON AND MIDDLEFIELD, MIDDLEFIELD NORTH OF THE CROSSWAYS, AND WILDCAT CANYON BETWEEN SUNSET AND PARK HILLS RD ARE ALL CLOSED DUE TO MUDSLIDE IN THE AREA,” the alert read. “SEVERAL RESIDENTS HAVE ALREADY BEEN EVACUATED. OTHER RESIDENTS IN THE AREA SHOULD BE PREPARED TO EVACUATE IF NOTIFIED.”

The Palo Alto Police Department issued an advisory at 7:57 a.m. that all lanes of El Camino Real were closed in both directions at the University Avenue underpass due to overnight flooding. There was no estimation for reopening given.

Meanwhile, San Francisco International Airport surpassed its yearly rain average just four months into the water year, according to the NWS. SFO hit 20 inches of rain during overnight, beating out the 19.64 inch yearly average with eight months to spare. The water year runs from Oct. 1 to Sept. 30.

The remainder of the week, with exception to Wednesday night, looks to be a welcome break from the storms for the Bay Area. Monday could see between one-tenth and one-quarter of an inch of rain in San Jose and less than one-tenth in San Francisco and Oakland.

As the clouds decrease in the evening temperatures were expected to drop to a low of 37 degrees in San Jose, and the low 40s in the East Bay and Peninsula. Tuesday was predicted to be clear with a high of 55 degrees throughout the region.

Wednesday could see light showers, with totals expected around one-quarter of an inch in Bay Area urban centers.

SAN JOSE, Calif. — Joany Morgan looked at her home in despair, the blue-hued house sitting in a foot of muddy water just across from the historic Felton Covered Bridge in the Santa Cruz Mountains. Yet again, the San ...Read More