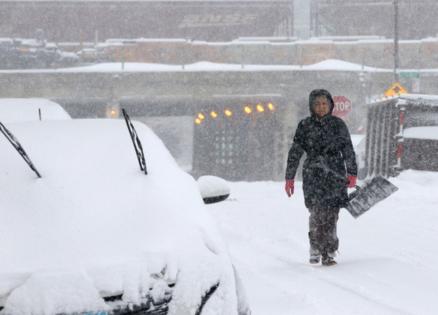 That “could wreak havoc on cross-country travel as well as pose a significant threat to lives and property,” AccuWeather meteorologists warned.

“The stage is being set for extreme weather conditions over the U.S. next week, especially for the middle of the nation,” AccuWeather meteorologist Bernie Rayno said in a statement.

Parts of Colorado, the Dakotas and northern Minnesota can expect “an all-out blizzard,” according to Rayno.

“Portions of the North Central states could be dealing with a doozy of a storm,” AccuWeather meteorologist Brandon Buckingham stated. “Moisture that is transported from the Gulf of Mexico all the way to the northern Plains by next Tuesday should be impressive.”

First, this week a storm will dump snow across 1,200 miles from Nebraska to Michigan, New York and Pennsylvania, though the flakes won’t reach New York City, meteorologists said Tuesday.

The storm will bring rain and flooding elsewhere in the U.S., followed by another possible “burst of snow” to parts of the Northeast as the weekend winds down, according to Accuweather.

The “meandering front with a steady feed of low-level moisture,” as the National Weather Service described it, will make for a constantly changing scene that had experts warning commuters to be ready for anything.

“Arctic airmass will produce accumulating snow, blowing snow, and bitter wind chills across the North Plains,” the NWS said on Twitter. “Snow also for parts of the Intermountain West into the 4-Corners. Widespread showers from the Plains to the Northeast and areas of dense fog. Warm temps in the South.”

That weather pattern will most likely bring “an outbreak of severe thunderstorms” as well as possible “multiple tornadoes,” Rayno said.

NEW YORK — New Yorkers hunkered down and hid from the cold for a second straight day Saturday as temperatures across the city dipped to the single digits.

More than 20 million people in New York and across the Northeast...Read More

NEW YORK — New Yorkers were hunkering down and hiding from the cold for a second straight day as temperatures across the city dipped below zero on Saturday.

More than 20 million people in New York and across the ...Read More

Officials warned Friday of single-digit temperatures and wind gusts of up to 45 mph from an arctic front blowing through the city and its ...Read More