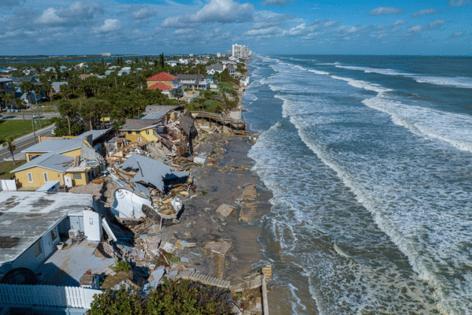 The system, described as a large area of low pressure, was pumping out showers and thunderstorms Tuesday morning over the central subtropical Atlantic, about 800 miles northeast of the northern Leeward Islands, according to the National Hurricane Center.

Forecasters say conditions are “marginally conducive for development,” enough for the system to turn into a subtropical or tropical storm in the next few days. The hurricane center is giving it a medium 50% chance of formation in the next two to five days.

It’s not a threat to Florida or the rest of the United States, and is forecast to stay in the Atlantic’s open waters.

Subtropical or Tropical Storm Owen might form in the Atlantic, forecasters said.

“By Thursday night or Friday, the low will move northeastward over cooler waters and interact with a mid-latitude trough, limiting subtropical or tropical development of the system,” the hurricane center said.

If the system does turn into a storm, it would be named Owen and become the 15th named storm of 2022. Owen would also be the 11th named storm to form in December since 1950, according to Philip Klotzbach, a meteorologist at Colorado State University.

While hurricane season officially ended on Nov. 30, storms can form at any time, although it’s not as common.

The most recent December tropical cyclone formation was in 2013. However, it was an “Unnamed” named storm because it was identified in post-season analysis, Klotzbach said.

NEW YORK — New Yorkers hunkered down and hid from the cold for a second straight day Saturday as temperatures across the city dipped to the single digits.

More than 20 million people in New York and across the Northeast...Read More

NEW YORK — New Yorkers were hunkering down and hiding from the cold for a second straight day as temperatures across the city dipped below zero on Saturday.

More than 20 million people in New York and across the ...Read More

Officials warned Friday of single-digit temperatures and wind gusts of up to 45 mph from an arctic front blowing through the city and its ...Read More