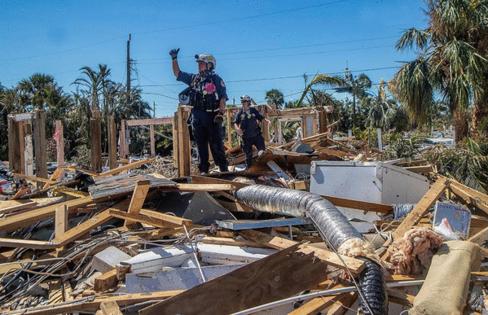 But as shown by the confusion and criticism in the devastating wake of Hurricane Ian, which struck Southwest Florida as a Category 4 in September, that single graphic isn’t great at explaining what’s coming. And that’s largely because the general public doesn’t understand what the cone actually means.

This conversation comes up every year, but as the 2022 Atlantic hurricane season draws to a close, it may finally lead to a real shift.

New research from the University of Miami confirms what a lot of emergency managers already knew, that people don’t understand the cone, and the UM experts are working with the National Hurricane Center to reshape it. Meanwhile, one Miami-based TV station, WSVN Channel 7, has already changed the way it displays the cone for storms, starting with Category 1 Hurricane Nicole in November.

The renewed scrutiny comes exactly two decades after the hurricane center debuted the cone of uncertainty, sometimes called the cone of concern. It’s a simple tool, showing the projected direction of the hurricane’s powerful eye over five days, with the most likely path of the center shown as a thin black line, with a larger shaded area covering areas with a high potential of getting hit by the eye.

The closer a storm gets, the smaller that shaded area becomes. But the width of the cone at each day actually doesn’t change from storm to storm in any given season. There is a reason for that. The cone’s size is determined by error margins from past forecasts — but even then, there is some wiggle room. The formula only predicts a two-thirds likelihood that the storm’s eye will pass somewhere within that shaded area. Thus, the “uncertainty” attached to the forecast maps.

But because scientists have gotten so much better at predicting storms, parts of the cone have shrunk nearly in half in the last decade — from 172 miles at the critical three-day mark to 92 miles. The increasing success of the hurricane center forecasts also have given the public more confidence in the cone, or overconfidence, as Ian showed.

But the bigger problem is that many people in hurricane-prone areas misunderstand that graphic, research shows. A newly published study from UM found that most Floridians surveyed incorrectly believe the shaded area represents places that will be affected by the storm. It doesn’t. The eye is likely to wind up anywhere in that cone and the damage will extend far beyond.

“I think that was the big downfall for this past event with Ian. A lot of the public was focusing just on that one singular line rather than the whole cone of uncertainty,” said Athena Masson, a meteorologist and adjunct professor at Flagler College in St. Augustine. “The public begins to think ‘it’s going to be this tiny little area. Everything outside that is safe.’ That’s wrong.”

What went wrong in Ian