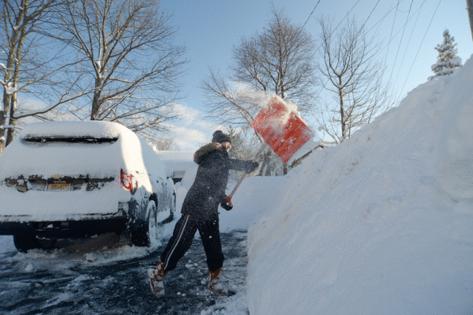 NEW YORK — Residents in Buffalo and across western New York were buried Saturday under several more feet of snow amid an unrelenting winter storm that has caused at least three deaths and paralyzed much of the region with road closures and flight cancellations.

Bands of heavy snow whipping off Lake Erie and Lake Ontario continued to batter the region, pushing snowfall rates up to 3 inches per hour, according to the National Weather Service. The intense snowfall, considered historic for the area, was expected to continue through the weekend with few moments of relief.

By Saturday evening, nearly 6 1/2 feet of snow had fallen on suburban Orchard Park, the home of the Buffalo Bills, according to the National Weather Service. The large suburb of Hamburg south of Buffalo had recorded more than 6 feet, while areas north of Buffalo had received lighter snowfall.

The storm started Wednesday night with a mix of precipitation that quickly transformed into an all-out snowstorm by Thursday. The storm’s severity has varied due to the quirks of lake-effect storms, which are triggered by frigid winds picking up moisture from the warmer lakes.

As the snowfall intensified, two residents in Erie County died from cardiac complications related to shoveling and attempts to clear their property, said Mark Poloncarz, the Erie County executive.

“We send our deepest sympathies and remind all that this snow is very heavy and dangerous,” Poloncarz tweeted. “Please continue to avoid shoveling this very heavy, wet snow — and use caution and avoid overexertion if you must shovel today.”

The storm killed a third person 400 miles west of Buffalo in Hamlet, Indiana. A snowplow driver in the town died Friday when his plow slid off the road and rolled over, police said.

Winter weather warnings remained in effect for all of the Great Lake states, spanning New York to Wisconsin.

Gov. Kathy Hochul declared a state of emergency Wednesday afternoon and announced that the New York State Thruway would be closed to commercial traffic starting Thursday afternoon from Rochester to the Pennsylvania border. The storm, bringing whiteout conditions, has made travel and commuting nearly impossible.

Additional snow amounts of 8 to 12 inches were expected across the Buffalo and Watertown metro areas, according to the National Weather Service.