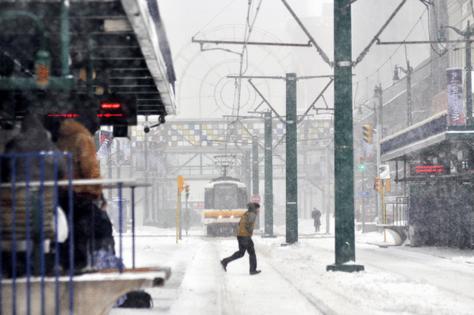 Bands of heavy snow pouring off Lake Erie and Lake Ontario continued to swirl over the region Thursday afternoon, the NWS said. The precipitation started as wintry mix of snow, rain and hail late Wednesday before it transformed into an all out snow-storm overnight — marking a fierce and frigid start to what forecasters predict will be a record-breaking, multi-day weather event.

Snowfall is expected to continue throughout the day Thursday, with the Buffalo and Watertown metro areas forecast to bear the brunt of the storm. Its intensity will be fueled by lakes Ontario and Erie, with some parts of Erie County getting up to an inch of snow an hour as temperatures drop from the 30s to the 20s and other areas getting as many as three inches hourly.

“We’re expecting upwards of 2 to 4 feet,” Gov. Kathy Hochul told reporters during a news briefing on Thursday. “And it’s not just the volume — 2 to 4 feet the first night; we could possibly see anywhere from four to six feet total between now and Sunday — it is the rate of snow that is most concerning.”

Hochul went on to call the weather event a “life-threatening storm” that could require “life-saving actions or rescues.” In preparation, 350 plows, and 600 workers have been deployed to the region while 5,700 utility crews were placed on stand by. The National Guard has also been activated and is prepared to respond.

The governor previously declared a state of emergency Wednesday afternoon and announced that the New York State Thruway would be closed to commercial traffic starting Thursday at 4 p.m. from Rochester to the Pennsylvania border. The storm was expected to make travel hazardous and potentially knock out power.

“Visibility will likely be next to zero,” warned Jackie Bray, New York’s commissioner of homeland security and emergency services.

Erie County Executive Mark Poloncarz recommended that schools and businesses close on Friday so plows and emergency vehicles can do their work.

“We need to take the upcoming snow storm seriously,” Poloncarz urged on Twitter. “It is VERY rare for the NWS Buffalo to declare a snow storm as ‘extreme’ on the severity index. Up to 3 feet of snow is possible from tonight to Friday night, with almost all of it falling starting tomorrow night.”

From Thursday through Sunday nights, “crippling lake effect snow” was possible, the NWS said. A high-pressure ridge from Alaska and Northwest Canada “will dislodge a plume of Arctic air southward, flowing down across the Great Lakes and lingering” for the weekend.

The looming storm drew comparison’s on Thursday to the Great Buffalo Blizzard, which struck the region in November 2014. It dumped more than 5 feet of snow on some parts of the Buffalo area.