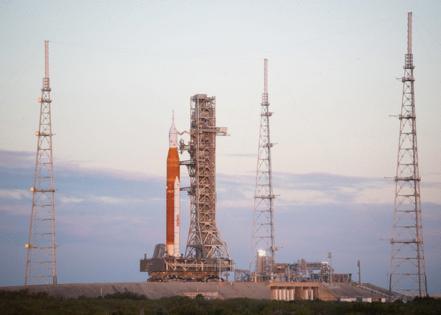 ORLANDO, Fla. — NASA left its $4.1 billion Space Launch System rocket and Orion spacecraft for the Artemis I mission to the moon on the launch pad at Kennedy Space Center to ride out Hurricane Nicole, noting that it could withstand sustained winds of 85 mph at 60 feet high when vertical at Launch Complex 39-B.

The weather sensors on a tower at LC 39-B record wind data among other things at various heights every five minutes, posted to kscweather.ksc.nasa.gov.

At lower heights, though, the wind was not as severe at that time. At 134 feet at that time, a sensor recorded a gust of 81 mph and sustained winds of 67 mph.

The tower’s tallest sensors saw gusts between 90-100 mph several times between 3 and 5 a.m. but sustained winds more in the 50-60 mph range closer to the ground.

Space website Spaceflight Now monitored Artemis I on the pad during the storm with multiple cameras set up at KSC that it streamed on its YouTube channel.

On one repost of the feed to its Twitter account, viewers can see the rocket disappear from view as rain squall from the hurricane moves across the space center.

Ahead of the threat of Hurricane Ian, NASA decided to table a planned launch attempt and roll the SLS, Orion and mobile launch back in September to the safety of the Vehicle Assembly Building. That storm ended up carving a path that took its center right in between KSC’s launch pads 39-A and 39-B.

With the threat of Nicole uncertain last week, officials decided to risk the rollout deeming its winds would not exceed NASA’s safety thresholds.