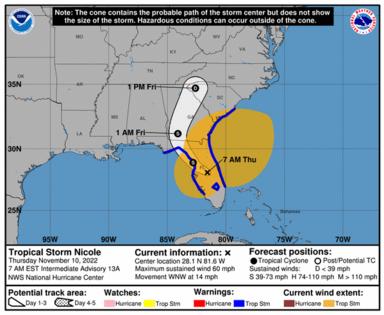 MIAMI — Hurricane Nicole made landfall just south of Vero Beach early Thursday morning with much of its worst damage already done along a Florida coastline battered by high surf and storm surge that undermined pool decks and at least a few buildings.

Nicole came ashore as a Category 1 hurricane with 75 mph winds but almost immediately weakened to tropical storm strength as it moved inland. But its massive wind field and bands of powerful thunderstorms extended hundreds of miles to the north, bringing gusts up to 60 mph and drenching rains across much of the upper half of the state — from Tampa to Cocoa Beach.

Conditions quickly improved in its southern wake. By mid-morning, there were no storm watches or warnings for Miami-Dade, Broward or Palm Beach. With the worst of the winds over, Miami-Dade planned to reopen schools Thursday, while dozens of other districts across the state remained closed.

In a 3 a.m. advisory, the National Hurricane Center put Nicole’s official landfall on North Hutchinson Island. By 7 a.m. it had begun degrading and weakened to a tropical storm with 60 mph winds as it swept inland with its center about 30 miles southwest of Orlando, which was recording tropical storm gusts and drenching rains.

It was far too early to take full stock of Nicole’s damage but hours before dawn, some 127,000 people were already without power across Florida — many of them on Florida’s Space Coast, which had endured more than a day of battering winds and waves. Brevard County, home to the Kennedy Space Center and on the storm’s stronger “dirty side,” had most of the outages, with nearly 71,000 customers in the dark, according to Florida Power & Light’s Power Tracker.

With storm surge and beach erosion the biggest threat, mandatory or voluntary evacuations also had been called for tens of thousands along the coast, from Palm Beach north to Volusia County.

Nicole was expected to spend much of the day crossing the state on a path that will take it up the Big Bend toward Tallahassee — possibly emerging into the Gulf of Mexico on the way.

But the heaviest toll will likely be to Florida’s beaches and beachside communities. Nicole ate away at beaches and dunes gnawed by Hurricane Ian in September, leading to a round of last-minute evacuations of beachfront condominiums, homes and a hotel in Daytona Beach Shores, an area already under a mandatory evacuation.

“There have been dozens upon dozens of buildings that have been declared structurally unsafe here along the beach in Volusia County,” Volusia County Sheriff Mike Chitwood said in a video update Wednesday afternoon. “We are fearful that several of those structures will collapse.”

Hurricane Nicole made its first landfall in the northeastern Bahamas Wednesday afternoon, in nearly the same spot Hurricane Dorian ravaged in 2019, and another landfall Wednesday night as it swept across Grand Bahama Island. There were no early reports of major damage but reports of “extensive flooding” on the island of Abaco.

Late Wednesday night, as Nicole approached, the fishing pier in Deerfield Beach lost some railings from the pounding waves. Sections of AIA in Fort Lauderdale and Hollywood’s beachside Broadwalk were all underwater from storm surge elevated by King Tides.

Michael Brennan, acting deputy director of the National Hurricane Center, said in a Wednesday morning broadcast that the storm’s wind field stretched more than 450 miles from the center, largely to the north.

“We’re very concerned about storm surge with Nicole with that large wind field,” he said. “That’s only going to get worse as we go through today and into the night cycle.”