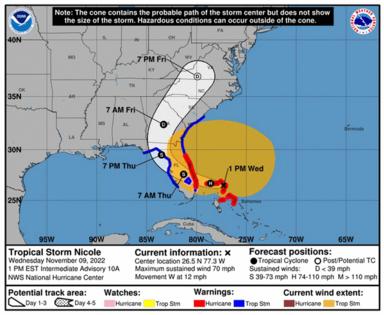 MIAMI — Hours ahead of its expected landfall on Florida’s east coast, Nicole strengthened into a Category 1 hurricane Wednesday evening. Its storm surge and high winds had already clawed pool decks, lifeguard stands and some buildings back into the ocean.

The first round of Nicole-strengthened high tides earlier in the day ate away at beaches and dunes gnawed by Hurricane Ian in September, leading to a round of last-minute evacuations of beachfront condominiums, homes and a hotel in Daytona Beach Shores, an area already under a mandatory evacuation.

“There have been dozens upon dozens of buildings that have been declared structurally unsafe here along the beach in Volusia County,” Volusia County Sheriff Mike Chitwood said in a video update. “We are fearful that several of those structures will collapse.”

Hurricane Nicole made its first landfall in the northeastern Bahamas on Wednesday afternoon, in nearly the same spot Hurricane Dorian ravaged in 2019, and another landfall Wednesday night on Grand Bahama Island. Forecasters said a third landfall was expected in the overnight hours somewhere north of the Palm Beach-Martin County border. It was a path expected to spare Miami-Dade and Broward counties significant damage — though a high risk of power outages remained.

But regardless of where the center crosses the state, forecasters warned the sprawling storm’s high winds and heavy rains would be felt statewide.

Almost 14,000 customers were already without power by Wednesday afternoon, with Nicole’s strongest winds still more than 100 miles from the Florida coast.

Michael Brennan, acting deputy director of the National Hurricane Center, said in a Wednesday morning broadcast that the storm’s wind field stretched more than 450 miles from the center, largely to the north.

“We’re very concerned about storm surge with Nicole with that large wind field,” he said. “That’s only going to get worse as we go through today and into the night cycle.”

With storm surge and beach erosion the biggest threat, mandatory or voluntary evacuations also had been called for tens of thousands along the coast, from Palm Beach north to Volusia County. Theme parks are closed, drawbridges are locked and Orlando’s International Airport shut down as the storm drew near.