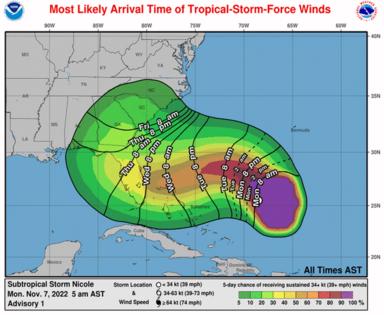 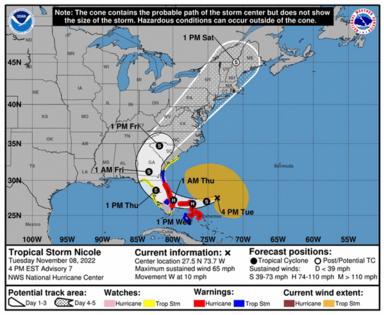 Overnight, the National Hurricane Center nudged its predicted track north toward Melbourne, moving Miami-Dade and Broward out of the cone of uncertainty, but Nicole’s wind field is already nearly the size of the entire state, so its effects will be felt throughout Florida starting as early as Wednesday.

Hurricane watches on Florida’s east coast were upgraded to warnings on Tuesday for most of the coast, except Broward and Miami-Dade, which remained under a hurricane watch and tropical storm watch, respectively.

Palm Beach County will close schools Wednesday and Thursday, and other east-central Florida counties may follow suit. Broward Schools Superintendent Vickie Cartwright said schools will go on as normal unless winds reach tropical storm force, which would force the buses to stop running.

Drawbridges in Miami-Dade County are being locked down to marine traffic. Locked bridges include those over the Intracoastal and the Miami River.

“Ian saturated soil and weakened trees in many parts of the state, so Nicole could cause trees to topple over and other vegetation and debris to blow into overhead power lines and equipment, which may cause outages,” he said in a statement.

As of 4 p.m. Tuesday, the National Hurricane Center placed Tropical Storm Nicole 285 miles northeast of the northwestern Bahamas and about 395 miles east of West Palm Beach. The storm, with sustained winds of 65 mph, was traveling west at 10 mph.