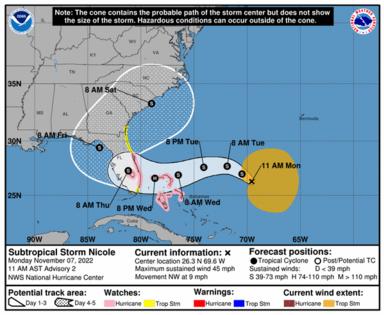 The threat from potential Hurricane Nicole increased Monday, with the possibility of strong winds, rising waters and flooding rains reaching parts of South Florida. And forecasters said Monday night that “there is more than the usual amount of uncertainty in the intensity forecast.”

Gov. Ron DeSantis issued a state of emergency in 34 Florida counties, including Broward, Miami-Dade and Palm Beach, on Monday as Nicole, a subtropical storm, is forecast to strengthen and potentially make landfall as a Category 1 hurricane Wednesday night or Thursday morning.

Wherever the storm comes ashore, most of the Florida peninsula will experience heavy rains, near-hurricane force winds and possible storm surge this week.

“We are technically still in hurricane season until the end of this month,” said Barry Baxter, a meteorologist for National Weather Service Miami. “So don’t let your guard down just because it’s in November. It’s rare we get them this time of year, but we could still get them.”

Forecasters say Nicole is “a large storm” that could reach maximum sustained winds this week of 75 mph, just 1 mph over the minimum threshold for a Category 1 hurricane.

“It’s not out of the question for Nicole to reach hurricane strength, especially given how warm the waters are in the vicinity of the Bahamas,” experts said Monday.

LOS ANGELES — California water agencies that serve 27 million people will see an increased allocation of supplies from the state after a series of winter storms boosted reservoirs and snowpack, officials announced ...Read More

LOS ANGELES — Now that the shock of a series of January storms has worn off, Los Angeles County officials face a herculean chore: Five reservoirs along south-facing San Gabriel Mountain slopes are filled with so much ...Read More

For decades, two climate patterns in the Pacific Ocean have loomed large in predicting weather in California and other parts of the globe. El Niño — a warming of sea-surface temperatures in the tropical Pacific — ...Read More

Since the tail ...Read More