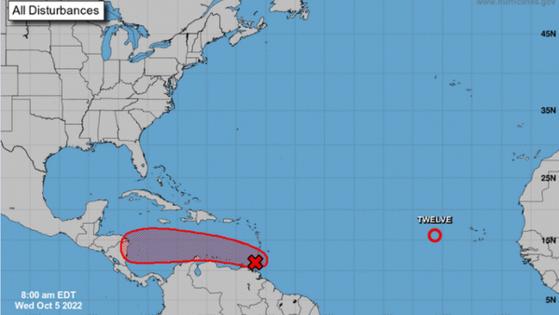 MIAMI — Forecasters on Wednesday were closely watching a system in the Caribbean Sea that has a high chance of turning into a tropical depression over the next few days. They’re also watching a struggling depression in the eastern Atlantic that should dissipate soon.

Will a depression form in the Caribbean Sea?

The disturbance that could turn into a depression soon in the Caribbean Sea is still struggling to form a well-defined center Wednesday night, according to the National Hurricane Center.

The system is not very well organized, though forecasters expect this will eventually change as it enters the south-central Caribbean Sea.

Forecasters raised the system’s chances of formation from 60% to 70% within the next 48 hours, and it now has a 90% chance of forming through the next five days.

“While land interaction with the northern coast of South America may hinder significant development during the next day or so, environmental conditions are expected to be generally favorable for development as the system moves westward, and a tropical depression is likely to form in the next couple of days by the time the system enters the south-central Caribbean Sea,” the hurricane center said in an advisory at 8 p.m. Eastern time Wednesday.

“Regardless of development, heavy rainfall with localized flooding, as well as gusty winds to gale force, are expected over portions of the Windward Islands, northern portions of South America, and the ABC Islands during the next day or two,” the hurricane center said.

Forecasters are also recommending that people in these areas, as well as those in Central America, should continue to monitor the system.

What about the depression in the eastern Atlantic?

As for Tropical Depression Twelve in the eastern Atlantic, the system was about 555 miles west of the Cabo Verde Islands on Wednesday, according to the hurricane center.

The depression, which formed late Tuesday, is moving west-northwest near 10 mph through the open waters with maximum sustained winds near 35 mph with higher gusts, forecasters said. It’s expected to turn into a remnant low by Thursday.

What’s the next storm name?

Julia is the next name on the list for the 2022 Atlantic hurricane season.