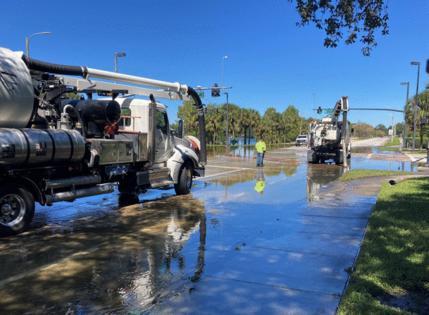 ORLANDO, Fla. — Days after Ian’s last gusts, the Orlando region’s sewage systems are fighting to recover and losing ground in many cases, swamping homes with wastewater, sending streams across roads without warning and pouring untold thousands of gallons into lakes.

Orlando leaders have warned that people should stay out of every city lake as a precaution and should “severely limit water usage until further notice.” That could be for at least a week.

As people return to Fort Myers to pick up the pieces after Hurricane Ian, some are finding that harder than others.

The combination of power outages and the influx of flood waters into sewer systems amounts to the worst nightmares of operators coming true, with nearly every facet of their sewage systems battered or enormously overwhelmed.

According to state reports so far available, Orlando’s sewage system, the region’s largest, likely represents the turmoil occurring with many other systems.

Sewage systems are comprised of small and large pipes that span nearly every street of their service areas and steadily combine into fewer and fewer pipelines. It’s almost impossible for ordinary residents to have any idea where their sewage flows and what disruptions may be downstream.

By Sunday afternoon, the city of Orlando had closed Mills Avenue along the stretch in front of the city’s art museum, where sewage gushed from one of the city’s biggest pumping stations and pipelines.

A steady procession of tanker trucks with vacuum hoses were intercepting some of the waste water flowing to Lake Estelle and also potentially into Lake Rowena.

Along Winter Park’s Lakemont Avenue just west of Winter Park High School, water was gushing out of a manhole cover and from pipes used for cleaning the sewer lines of individual homes.