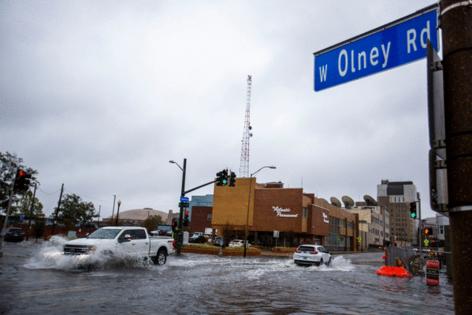 VIRGINIA BEACH, Va. — A coastal flooding event unseen for a decade could inundate parts of Hampton Roads on Monday — three days after the remnants of Hurricane Ian swept through the region.

A low-pressure system spawned in the aftermath of Ian is forecast to bring rain and more high winds that could push tides higher than were experienced Friday.

After Sunday night's high tide, which is projected to be about 5 feet above normal, Monday’s is projected to be from 6.9 to 7.3 feet, according to the National Weather Service in Wakefield. That would put some coastal areas under as much as 3 feet of water.

Rain from Sunday into Monday will worsen the flooding. Hampton Roads got about 3 inches from the remnants of Ian, with the potential for another inch by Tuesday.

According to Skip Styles at Wetlands Watch, most of the region will not drop below flood stage until Tuesday morning.

“People need to be prepared, we will see several high tide cycles where water will get into properties, homes and businesses that are normally dry,” said Mike Dutter, meteorologist at the NWS.

The storms and flooding have already been more than a nuisance for many, with trees falling onto school buses, a church steeple toppling over onto a a neighbor’s home and thousands of power outages. With the threat of gale-force winds at speeds up to 50 mph and more tidal flooding, it may not be time to put away your candles just yet.

Dominion Energy brought power back for the thousands who were in the dark over the past few days, but as of this morning over 600 homes remained without electricity.

“The current forecast shows the potential for strong winds, so they should prepare for more power outages,” said Paula Miler, a senior communications specialist with Dominion Energy.

She said electricians and contractors with Dominion Energy are ready to respond to additional outages as they come.

Unnecessary driving during heavy flooding is not recommended by the Virginia Department of Transportation because it has the potential to create more problems on the roads.

Cars can often be seen plowing through water in flooded streets, but it is not always a good idea to press on. The depth of the water can be deceiving. For those who need to drive, VDOT has cleaned drains to help improve the water flow off the roads and implemented some lane closures. Following signs like road closure warnings can save your car from getting stuck.

According to VDOT, the primary cause of flood-related deaths are from driving into or walking through floodwaters.