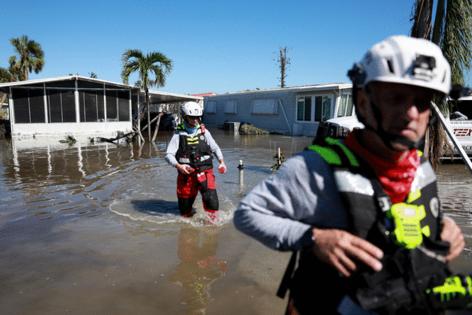 But for most of Florida, the greatest hurricane threat was the water.

The combination of epic storm surge along the coast and unprecedented rains inland flooded homes across a huge swath of the state. It’s the risk meteorologists have been sounding the alarm on for years — and the impact that scientists can most clearly say is made worse by climate change.

Final tallies aren’t in yet, but it’s clear Ian brought historic levels of storm surge from Key West to Naples to Fort Myers, with some spots seeing at least seven feet of water above dry land. And as Ian moved toward South Carolina, early reports showed the Atlantic ocean surging in at levels higher than 2016’s Hurricane Matthew with house-swamping levels of flooding in St. Augustine and Charleston, South Carolina.

On Sanibel Island, where Ian’s eyewall came ashore, the Gulf of Mexico rushed inland, sending floodwaters from a puddle on the street to the height of a stop sign in under half an hour.

Cole Mazza, a 25-year-old bartender, had to grab his cats Dolce and Gabbana and swim to safety in the pitch black as the surge rushed into his neighborhood in Fort Myers.

“A mini-tsunami hit and the water came up to my front doorknob. It was rising so fast I knew it was only a matter of minutes before I was underwater,” he said. “So I stuffed my cats in my carry-on suitcase, grabbed my sister’s ashes and jumped out the living room window.”

After dodging floating projectiles like fences and mailboxes, he found salvation in a neighbor’s home on stilts at the end of the street.

Gov. Ron DeSantis called it a flood of “biblical” proportions, and President Joe Biden warned it could prove one of Florida’s deadliest hurricanes.

“Storm surge is gonna be what this storm is remembered for,” said Jeff Berardelli, a meteorologist and climate specialist with WFLA in Tampa Bay. “It’s going to go down in the history books.”