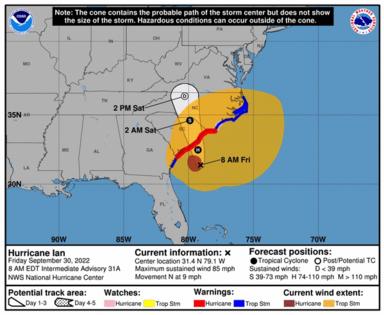 The storm arrived at 2:05 p.m., touching down near Georgetown as a Category 1 hurricane. Ian made its arrival known well before slashing across South Carolina — cutting power to an estimated 70,000 customers and driving waters over low-lying roads in North Myrtle Beach’s Cherry Grove area.

Police in Pawleys Island said the end of its pier had washed into the Atlantic. Gov. Henry McMaster said Friday morning that President Joe Biden approved a federal emergency declaration for the state.

The president is “fully aware of our situation” and vowed “whatever help” is needed, McMaster said.

The National Weather Service said powerful storm surges of up to 7 feet were possible, with localized flooding in some of Horry County’s busiest areas including Barefoot Landing, Myrtle Beach, the Myrtle Beach International Airport and North Myrtle Beach.

McMaster declared a state of emergency Thursday, allowing for the flow of cash and resources into hardest-hit portions of South Carolina.

In the Lowcountry, conditions began improving Friday morning after forecasters dialed back threats of coastal flooding as Ian jagged eastward nearer to the Santee River.

Like every hurricane, Ian has a dirty side, which, as the name suggests, is a place no one would want to be because it’s usually considered the area with the most threatening weather.

“While any part of a hurricane can be life threatening — we typically see the potential for higher storm surge on the right front side of the storm with respect to its motion.” said Steven Pfaff, a meteorologist with the National Weather Service.

The Midlands also took action as Ian bore down on the Palmetto State. At 11:40 a.m. Friday, the last flight of the day left Columbia Metropolitan Airport. There was drama in the Columbia suburb of Irmo as well, where a woman was cut out of her vehicle after Ian’s winds toppled a tree onto its roof.

Even when Ian departs, weather conditions will remain dangerous. Horry County had flash flooding, rip current and tornadoes watches in place late afternoon into the evening.