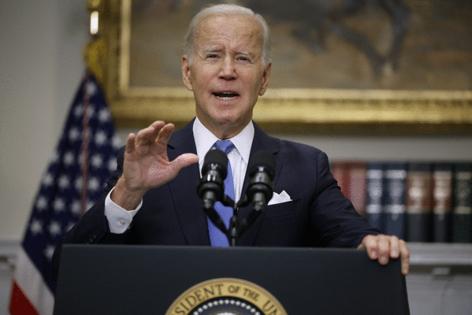 WASHINGTON — Hurricane Ian is “likely to rank among the worst in the nation’s history” and is posing a crisis to the nation, President Joe Biden said Friday, addressing the powerful storm that devastated Florida this week and reconstituted Friday in the Atlantic for a second U.S. landfall in South Carolina.

“It’s not just a crisis for Florida. It’s an American crisis,” Biden said. “My message to the people of South Carolina is simple: Please listen to all of the warnings and directions from local officials, and follow their instructions.”

Ian landed in Florida on Wednesday as a strong Category 4 hurricane, and struck South Carolina Friday as a Category 1 storm.

He has also declared an emergency for South Carolina, enabling federal responders to preposition themselves in the state ahead of the hurricane’s landfall.

Biden has spoken with the Republican governors of both states — Ron DeSantis of Florida and Henry McMaster of South Carolina — by phone, assuring them they will have every federal resource they need, he said.

But of the two, “the situation in Florida is far more devastating,” Biden said, speaking from the Roosevelt Room of the White House.

“At my direction, we predeployed the largest team of search-and-rescue experts in recent history, because so many of the rescuers need to take place now, need to be in place now, in the water now,” Biden said.

So far, federal authorities have successfully rescued 117 people in the Fort Myers and Naples areas.

“It’s likely to rank among the worst in the nation’s history,” Biden said. “I just want the people of Florida to know, we see what you’re going through and we’re with you.”