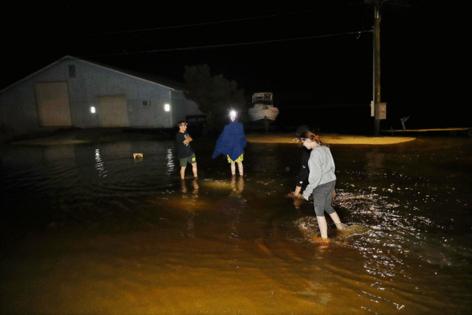 ATLANTA — Cleanup has begun in parts of coastal Georgia as Ian heads north.

Residents in historic downtown St. Mary’s started the day assessing knee-deep flooding in its central business district while most flights at Savannah/Hilton Head International Airport have been canceled Friday, with nearly 90 cancellations including arrivals and departures, according to FlightAware.com .

Although airlines are canceling flights, the Savannah airport said it would remain open and is advising travelers to check their flight status before going to the airport.

In Glynn County, the soaring Sydney Lanier Bridge, which spans the Brunswick River, reopened Friday morning after being closed as a precaution Thursday.

“I feel awful for our neighbors in Florida,” Cap Fendig, the Glynn county commissioner who represents St. Simons Island. “It was just not our time on this one. As history shows and even in our community a hurricane can come anytime from anywhere and can have far-reaching devastation to inland communities.”

The only damage reported by Glynn County spokeswoman Katie Baasen was a missing step from the Eleventh Street beach crossover on St. Simons Island. The county also noted that the boardwalk at Gould’s Inlet appeared to have been lifted by the surge and now sits unevenly.

With Georgia no longer expected to be greatly impacted by the storm, Gov. Brian Kemp is offering the state’s resources to Florida and South Carolina to assist with any relief or recovery efforts.

“We really dodged a bullet on this one but we continue to have the folks in Florida, who have literally been devastated by this storm, in our thoughts and prayers,” Kemp said from the state’s operation center Friday morning. “We stand ready to use our resources to help our friends and neighbors in a time of need.”

Kemp said damage in Georgia has been limited to some flooding reported on the coast. Port operations remain at a standstill waiting for the storm to pass but Kemp said the Port Authority and Coast Guard will be working together to get traffic flowing again as soon as it is safe to do so.

In terms of loss of power, Kemp said there are a little over 1,000 people across the state without power and it is under control, with crews already responding.