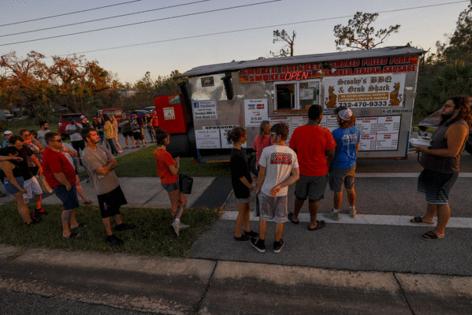 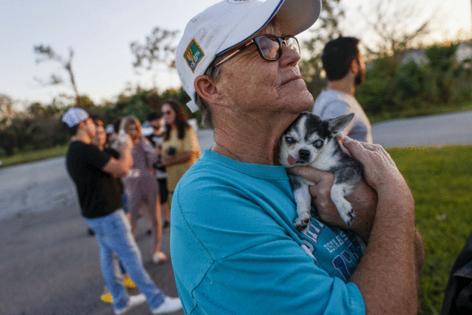 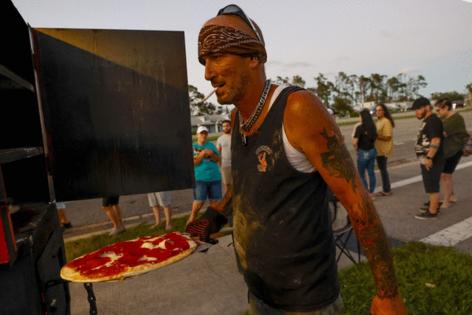 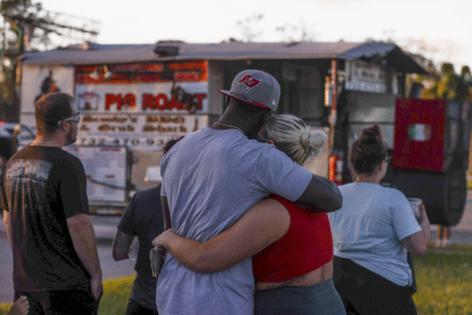 PORT CHARLOTTE, Fla. — The line grew longer and longer in the empty lot off Tamiami Trail.

A man in a sweat-soaked bandana came out of the tiny trailer, held his hands out wide and yelled over the generator: Three racks of ribs left, four orders of brisket, but plenty of pulled pork.

His food truck, Scooby’s BBQ & Grub Shack, pulled into the Port Charlotte lot two hours before sundown Thursday evening. He usually roves around Brooksville, Spring Hill, New Port Richey and Port Richey in Pasco and Hernando counties, but on Thursday, he packed up his blue pickup truck and trailer with a pizza oven in tow and drove 3½1/2 hours south.

Alexander enlisted young men in the line to hand out free bottles of water. Every break to sip some Sprite and drag on a Kool cigarette, he asked if there were any first responders. They got whatever they wanted for free: Barbeque, pizza, burgers.

”I wanted to help these people out,” Alexander said. “They don’t got s—t.”

Cars peeled into the lot. Folks who have seen better days asked around if the food truck took debit cards, or if there was any food left.

”It would just be nice to have some warm food,” said Garfield Scarlett who waited in line for over an hour to take meals home to his family of three. “There’s no convenience stores, nothing.”

Pulled Pork sandwiches went for $12, a half pound of brisket for $15.

“That’s the business to be in right now,” Scarlett said.