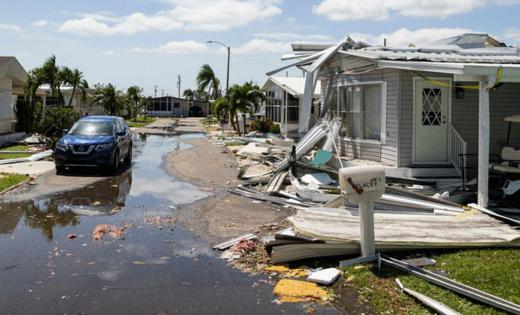 MIAMI — Election officials in Florida are discussing alternative means of voting for counties most affected by Hurricane Ian, with just a week before the deadline for mail ballots to be sent out and less than six weeks until Election Day.

Mark Earley, president of Florida Supervisors of Elections, said that while it was too early to know the full extent of damages, and no final decision has been made, there’s a chance several counties will have to delay their scheduled mail-out dates for domestic vote-by-mail ballots — potentially past the deadline imposed by Florida’s constitution.

“There’s a possibility some counties may need some additional time,” said Earley, who is also Leon County’s Supervisor of Elections. “That’s still being assessed on a county-by-county basis ... Most counties will be able to meet that deadline. I think there might be some exceptions to that.”

State law requires supervisors of elections to send vote-by-mail ballots during a seven-day window, which is between 40 and 33 days before an election. For this year’s Nov. 8 general election, that means the last day is Oct. 6.

The massive Hurricane Ian, which made landfall as a Category 4 storm and caused historic storm surge flooding, has left damage all through Southwest and Central Florida in its wake. At least 12 people are confirmed dead throughout the state, with that figure expected to rise.

Attempts to reach elections officials in Lee and Charlotte County — where Ian roared ashore Wednesday — were unsuccessful. Nearly 200,000 people voted by mail in those two counties during the most recent midterm election, in 2018.

Earley said that he has been in touch with most election supervisors, particularly those in Southwest Florida, with the exception of one official, whom he declined to name to avoid raising unnecessary panic over his well-being. For the most part, Earley said, those supervisors are still assessing their own personal needs and will “hopefully tackle their elections offices in the morning.”

“They had to react fairly quickly,” he told The Miami Herald. “Some of them moved away from the county ... And so they’re still trying to work their way back to their offices.”

The Florida Department of State did not respond to a request for comment about the mail ballot situation. But Earley said he has been in constant with Secretary of State Cord Byrd about the situation.