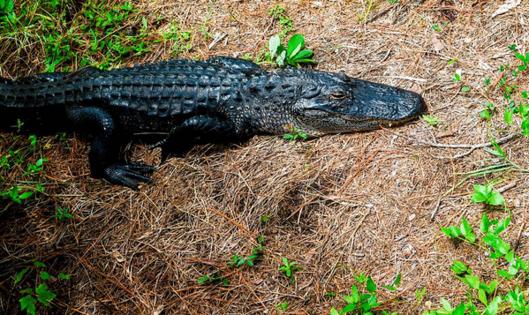 COLUMBIA, S.C. — Hurricane Ian is strengthening as it heads toward Florida and then South Carolina, bringing with it heavy rains, potential flooding — and possibly alligators.

The scaly critters have been known to show up in spots they wouldn’t otherwise visit because of hurricane flooding. Thanks to smartphones, alligator sightings have been plentiful after hurricanes in recent years. In 2018, for instance, a gator was spotted swimming in a flooded dog park in Myrtle Beach after Hurricane Florence.

And with sightings of alligators where they’re not supposed to be comes the fear of an attack.

So since there’s another hurricane barreling toward South Carolina, what are the chances of an alligator attacking someone during or after a big storm? For that matter, what about under normal circumstances?

Not likely in both cases, according to a report by University of Florida researchers.

Composed by a team of biologists, the report states that unprovoked alligator attacks on humans are rare.

What do alligators do during a hurricane?

The report states that researchers in Florida who have observed alligator behavior during storms have not found any evidence of them actively hunting or seeking out prey during hurricanes.

“While alligators are heavily armored, they are equipped with highly sensitive receptors that can detect changes in pressure. If a hurricane is moving in, they are likely preparing to hunker down,” the report states.