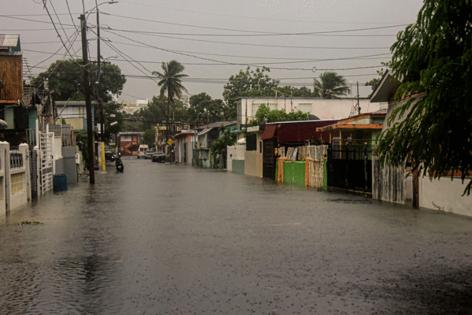 The seventh tropical storm of the 2022 Atlantic hurricane season, Gaston, formed Tuesday over the north-central Atlantic — but far from land.

Forecasters are also watching two disturbances, and one has a high chance of turning into a tropical depression in the next several days and could be something for Florida to watch.

Also on forecasters’ radar: Hurricane Fiona, which left devastating damage in Puerto Rico and the Dominican Republic and continued to batter Turks and Caicos most of Tuesday as a Category 3 hurricane.

Tropical Storm Gaston was about 990 miles west of the Azores, according to the National Hurricane Center’s 5 p.m. Eastern time advisory Tuesday.

The system had maximum sustained winds near 40 mph with higher gusts, and forecasters expect Gaston to strengthen, with about 60 mph winds, in the next few days before petering out. It is not forecast to become a hurricane.

“Interests in the Azores should monitor the progress of the system,” the hurricane center said.

Forecasters expect the system will become extra-tropical over the weekend once it runs into cooler waters, drier air and an increase in westerly shear.

—What about the two disturbances?