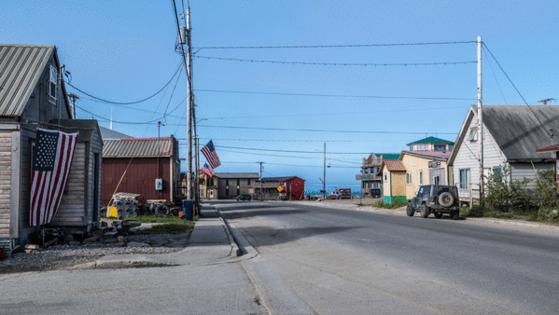 NOME, Alaska – The storm that slammed Western Alaska over the weekend has reorganized the land.

There was no loss of life, but the landscape of Nome is physically altered for the foreseeable future, with raw material scattered wildly, the coastline reconfigured, the camps and shore-side compounds anchoring generations of subsistence either flattened or gone.

All up and down the Nome-Council Road heading east out of town, cabins used for fishing, foraging and seasonal family life are in ruin.

“Some of them just disappeared,” said Bryant Hammond, the incident commander for Nome’s emergency operation center.

Nome, a city of about 3,700 people that functions as the commercial and logistical hub for 15 smaller communities in the Bering Strait region, weathered the worst storm in decades relatively well. By Monday, business owners were unboarding windows along Front Street and shoveling muck out of gutters as heavy equipment rumbled around side streets and the seawall. Utilities are fine. Many car and truck owners are gradually discovering their vehicles were effectively totaled by partial submersion in the salty, silty floodwaters.

But the worst damage is out of town, with an as yet uncounted number of subsistence cabins in shambles.

To those unfamiliar with Western Alaska, the word “cabin” might conjure a hut of neatly notched logs nestled in the woods, or a euphemism for a lavish weekend home overlooking Nancy Lake. These are not those. The fish camps peppering the river mouths and shores of the southern Seward Peninsula are more like cozy shacks, neither electrified nor plumbed, buttressed by meat racks, smokehouses, saunas, cutting tables, woodpiles and utilitarian bric-a-brac for making use of the land and sea’s seasonal offerings.

They are essential to the region’s economy: family-scale food production and processing plants, summertime child care and education centers, a release valve for overcrowded homes and apartments in a region with an endemic housing shortage.

“My daughter’s smokehouse is gone. The outhouses gone,” said Sterling Gologergen, standing at her second-story living room window, from where she watched the storm drown Nome’s small-boat harbor Saturday.

Even though the main cabin at her daughter’s camp remained intact, bedding and other material inside was soaked, ruined, costly to eventually replace, Gologergen said. Though she’s lived in Nome for a decade, the 67-year-old spent most of her life on St. Lawrence Island, where the communities of Gambell and her hometown of Savoonga were largely spared substantial destruction, but caches of fish and meat stored or hung from racks by the shore were trashed or gone.