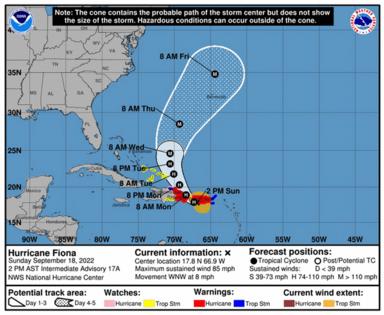 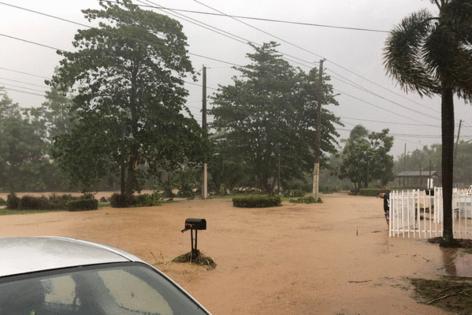 “The damage we are seeing is catastrophic” Puerto Rico Gov. Pedro Pierluisi said during a news conference Sunday evening.

Fiona is pummeling the U.S. territory nearly five years after Hurricane Maria devastated the island’s infrastructure, killing thousands and keeping millions in the dark for months. As of late Sunday afternoon, the Puerto Rican government hadn’t reported any deaths caused by the hurricane.

Pierluisi said some evacuations were underway in the towns of Caguas and Toa Baja. Fiona has caused “severe damage” in several towns, he noted, knocking down trees and power lines, producing landslides, and blocking roadways.

“The danger of flooding and landslides continues,” added the governor, “and no one should be taking to the streets with the exception of first responders.”

Fiona made landfall shortly after 3 p.m. Sunday in the coastal town of Cabo Rojo. It was moving just west of Puerto Rico and heading for the Dominican Republic, the National Hurricane Service said Sunday in its 5 p.m. advisory.

“The current weather conditions are currently extremely dangerous and are hindering our capacity to evaluate the situation,” Sorrentini said. “We will begin the re-establishment efforts as soon as it is safe.”

MIAMI — Tropical Storm Ian on Thursday moved off Florida’s east coast and into the Atlantic, where it’s expected to strengthen into a hurricane again as it approaches South Carolina.

And just because Ian is no ...Read More

But Hurricane Ian was more brutal than some residents of Fort Myers Beach ever imagined.

Kevin Behen left his studio apartment and hunkered down in a ...Read More

TAMPA, Fla. — It was an unusual scene, sure to enrage public safety officials who had warned people of the danger. But the Instagrammers just couldn’t resist.

MIAMI — Hurricane Ian left millions of Floridians without power Thursday morning, and they could be left in the dark for days.

Nearly a quarter of all Floridians sit without power Thursday morning, according to ...Read More