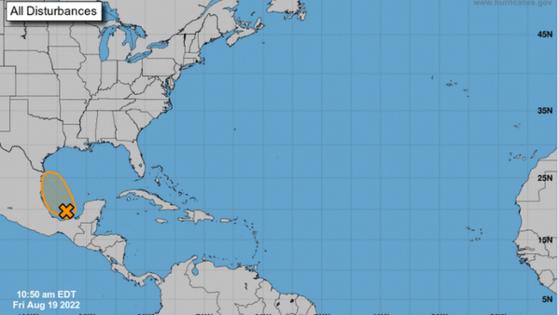 MIAMI — A disturbance in the Gulf of Mexico could turn into a tropical depression soon, forecasters said Friday.

The system, described to be a broad area of low pressure, was producing disorganized showers over the southwestern Gulf of Mexico and the Bay of Campeche, according to the National Hurricane Center’s 8 a.m. advisory.

Forecasters say conditions are favorable for “slow development” of the system, enough for a tropical depression to possibly form Friday or Saturday as it moves northwest across the Gulf. The system has a medium 40% chance of formation through the next two to five days, according to the hurricane center.

“However, by Saturday night, the system is expected to move inland over northeastern Mexico, which will end its chances of development,” according to the hurricane center. The system is not a threat to Florida.

NOAA’s revised prediction says there could be 11 to 17 named storms before the Atlantic’s 2022 hurricane season ends on Nov. 30. The next storm name on the list is Danielle.