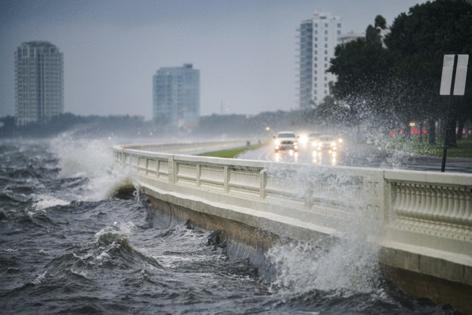 TAMPA, Fla. — It has been well over a month since the Atlantic Ocean has had any rumblings of tropical storm activity.

There have been only three named storms so far this year. The last was Tropical Storm Colin, which fizzled out along the South Carolina coast over the Fourth of July weekend.

But in the coming weeks, experts expect tropical activity will ramp up.

Late August and September are peak hurricane season months, when 90% of tropical storm activity occurs. Add in that a plume of Saharan dust that has stymied tropical development is starting to lift, and conditions are ripe for storms to erupt.

Philip Klotzbach, a meteorologist at Colorado State University, tweeted recently that the last time the Atlantic Ocean had no storm activity from July 3 to Aug. 16 was in 1999. That year ultimately ended with 12 named storms. In 2021, the National Oceanic Atmospheric Administration increased what it considers to be an average number of named storms in year from 12 to 14.

The agency announced in early August it is still expecting an above-normal hurricane season with 14 to 20 named storms this year.

The government agency said at the time that this year’s quieter June and July was expected.

The slower season start is a welcome change from the past two seasons — 2020 and 2021 — which produced a combined 51 named storms.

The cloud of Saharan dust brought dry air that has stifled tropical activity so far this season, said Nicole Carlisle, a meteorologist with the National Weather Service. With the dust making its way out, conditions are more favorable for storm activity, she said.

This week, a tropical wave cropped up in the Caribbean Sea, Marquez said. The wave has the potential to form over the weekend, Marquez said, but it would likely bring only rain to Mexico or Texas — not Florida.

“We always watch this month, but even September and October we have to watch closely, anything that can come toward not only Florida, but perhaps toward our area,” Marquez said.