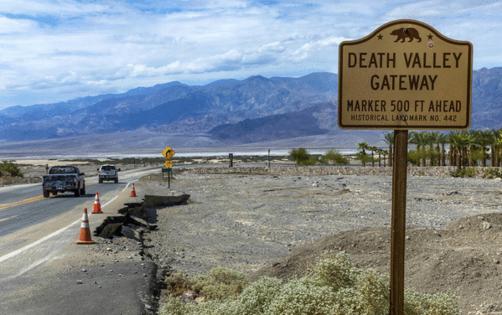 LOS ANGELES — As Death Valley National Park gets ready to reopen its most popular sites on Saturday after heavy flooding, California national parks are still reeling from the aftermath.

After heavy rainfall caused flash flooding in the state's mountains and deserts, Death Valley was forced to close all roads into the park on Aug. 5. The closure occurred after a historic storm wreaked havoc on the park, damaging 60 vehicles and trapping about 500 visitors and another 500 staff members.

"This was a 1,000-year flood event. It is quite possibly the most widespread catastrophic event in this park's history," said Ana Cholo, a Death Valley National Park spokesperson. "The park, which has approximately 1,400 miles of roads, including 200 miles of paved roadways, was affected by debris, shoulder road loss, undercutting and pavement loss."

On Monday, the U.S. Department of Transportation provided the park with $11.7 million in emergency relief funding to repair damage from the flooding.

Workers have been able to assess 600 miles of roads, and 200 miles were deemed impassable, Cholo said. There are still 800 more miles of road to assess.

Cholo said the flood recovery efforts in the park are far from over. Of the park's 3.4 million acres — 93% of which are designated as wilderness — only 42% of the roadways have been currently assessed. Park roads may remain closed for weeks and months, depending on the severity of the damage, Cholo said.

The Badwater Basin will also reopen, but it will be accessible only from State Route 190 and will be closed at Mile Marker 17, Cholo said. State Route 190 had been scheduled to reopen Wednesday, but that was delayed to Saturday after authorities determined the road was not ready.

Cholo also warns that several park roads will remain closed, so visitors should plan ahead and not rely on navigation tools or GPS.

Joshua Tree National Park was also hit by a massive rainstorm Tuesday that was concentrated in the southern area. As of Wednesday morning, the Pinto Basin Road from Ocotillo to the south boundary, the Geology Tour Road from the northern gate to Berdoo Canyon, and the Big Horn Pass complex are all closed. It is unclear when the park plans to reopen these sites.