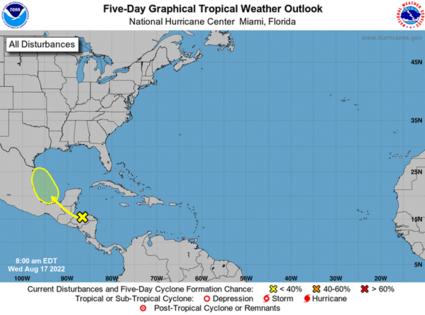 A tropical wave near Central America is moving north and could become the fourth named storm of the year.

The wave is near Nicaragua and eastern Honduras and is forecast to move across Central America and emerge over the Bay of Campeche, where it could emerge Friday as an area of low pressure. However, it could be met with trouble as dry dust from the Saharan Air Layer is forecast to appear in the same location Friday, according to the National Weather Service tracker. The SAL is a migration of African dust, which pushes west and into the Caribbean, drying out atmospheric conditions of the Atlantic basin and making it too dry for hurricanes to form.

The NHC gives the system a 20% chance of formation in the next five days. If it does develop, it would be the fourth named system of the year and take on the name Danielle.

Despite multiple forecasts of above-average storm production, the season has been off to a slow start given the historic record of Atlantic storms, which typically sees four named storms by Aug. 15, according to the National Oceanic and Atmospheric Administration. Earlier this month, the NOAA reaffirmed its preseason prediction of an above-average hurricane season with a range of 14 to 21 named storms. The NOAA expects most storms to emerge during the season’s peak, occurring between mid-August and mid-October.

So far, the 2022 season has seen three named storms: Alex, Bonnie and Colin — the latter of which fizzled at the beginning of July. After a month of tropical silence, the NHC has been jumping around the last 10 days, tracking short-lived systems with the potential to form into depressions or tropical storms.

Over the weekend, the NHC was tracking a broad trough of low pressure in the mid-Atlantic, but its chances of formation dropped to 0% by Monday morning. Before that, the NHC had eyes on a system in the Gulf of Mexico, but it failed to form into more than a spate of showers and thunderstorms that drenched southeastern Texas. And before that, a system off the African coast was demanding attention before environmental factors snuffed its chances.

NAPLES, Fla. — Piles of damaged furniture, damp mattresses and broken electronics sat Saturday in front of most houses on the east side of Naples’ only historically Black neighborhood.