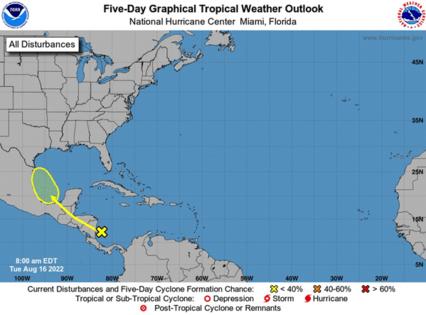 FORT LAUDERDALE, Fla. — A disturbance over Nicaragua is expected to move across Central America this week then emerge over the Gulf of Mexico.

National Hurricane Center forecasters say some slight development is possible through this weekend as it continues to trek northwest over the southwestern Gulf of Mexico and close to Mexico’s east coast.

It has a 20% chance of developing, which is regarded as a low chance, the National Hurricane Center said as of 8 p.m. Eastern time Tuesday.

Despite the fact that there have only been three named storms so far this Atlantic hurricane season, experts still predict an above-average season.

Activity generally heats up as we enter the peak of the season, which generally runs mid-August through late October.

The latest prediction from NOAA experts was 14 to 20 named storms and six to 10 hurricanes this season — three to five of which are expected to be major hurricanes, which are Category 3 or higher.

The next named storm to form in the Atlantic would be called Danielle.

NAPLES, Fla. — Piles of damaged furniture, damp mattresses and broken electronics sat Saturday in front of most houses on the east side of Naples’ only historically Black neighborhood.