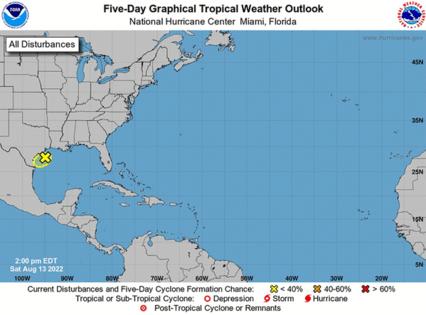 In its 8 p.m. Saturday tropical update, the NHC said the weak low pressure area located off the Texas coast has increased shower and thunderstorm activity.

“Although there is some potential for land interaction to cause the disturbance to become better defined while moving onshore Sunday morning, significant development of the system is not anticipated,” forecasters said.

Whether or not the system grows, local rain is possible along the Texas coast through the weekend.

The NHC gives the system a 20% chance of formation in the next 48 hours, up from 10% Saturday morning.

Hurricane season is approaching the portion of the year known as the peak of season, which is known for the most prolific production of storms between mid-August and mid-October, with Sept. 10 recorded as the statistically most productive day of storms in the tropics.

So far, the 2022 season has seen three named storms: Alex, Bonnie and Colin. Based on historical averages, the fourth named storm of the year typically appears by Aug. 15. If a system were to emerge, it would receive the name Danielle.

Last week, the National Oceanic and Atmospheric Administration reaffirmed its preseason prediction of an above-average hurricane season with a range of 14 to 21 named storms. The NOAA expects most of those storms to emerge at the peak of the season.