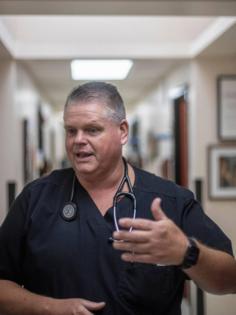 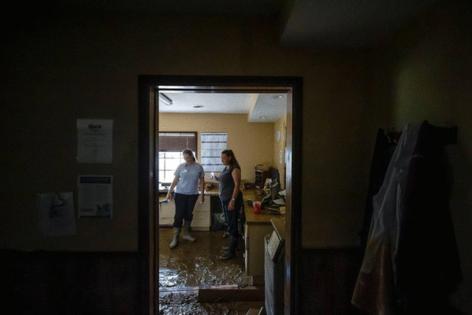 WHITESBURG, Ky. — By 10 a.m. on Monday, Dr. Van Breeding was already on the phone with Colleen Swartz, vice-president of operations at UK HealthCare, begging for supplies.

“I think we’re going to need 5,000 shots of tetanus and Hep A,” he told her. “We’re completely out. The workers all need the vaccine, too.”

As director of clinical operations at the Whitesburg Mountain Comprehensive Medical Clinic, Breeding and his employees have hardly slept since Thursday, when floodwaters swamped Whitesburg at unprecedented levels. They evacuated a nursing home, they rescued people from their homes with kayaks, boats and jetskis, they helped set up a shelter at the CANE Kitchen in the old high school, and by Friday, they turned their attention to the flood clinic on Medical Plaza Lane. It wasn’t as bad as some places — just a few inches of mud as opposed to total immersion — but patients were already starting to trickle in. By Friday, the clinic was back open. On Monday, the clean waiting rooms were filled, as nurses and aides cleaned others.

“It’s a miracle, we worked around the clock and reopened,” Breeding said. “You don’t have time to think about it, you just do it.”

“We need oxygen, at least 1,000 bottles because so many people lost their oxygen,” he said. So many people lost everything in an already medically fragile and under-served region. Breeding said one of his elderly patients had died from a lack of oxygen. So many people in so much shock and pain and bare feet, pulled from their houses without their medications, without anything. All the victims and all the helpers have been exposed to toxic floodwaters — full of mine runoff and flooded sewer systems — that can cause tetanus and hepatitis. They need Breeding’s help.

And he needs help, too: Oxygen and insulin and IV tubing and IV solutions, and more tetanus and more of everything, including money, since medical supplies are a bit beyond the average citizen. So in between seeing patients, Breeding is talking to his medical network and posting pleas for help on Facebook and coordinating phone calls. Many of his nurses have gone out looking for their patients, taking food and water and doing general wellness checks because so few people have any kind of phone or computer service right now. The Mountain Comp system has 10 clinics around the region serving 50,000 patients for a full range of care. At least 30,00 patients have been affected by floods, Breeding estimates while the Isom clinic was totally destroyed by floodwaters.

“Because we don’t get a lot of help, we have the ability to think on our feet and get things done,” he said.

Breeding is 60 and a native of Whitesburg, and as many have recounted, the worst flood in Whitesburg’s history was in 1957 and this was far, far worse. The clinic itself has never taken on water.

By mid-morning Thursday, the water was doubling in volume every 30 minutes. Byron Thomas, a doctor at the clinic, was at the ARH Hospital on Thursday morning when he started hearing about nurses unable to get to work. He joined an informal rescue corps of emergency workers and civilians who commandeered boats and kayaks and even a jetski to rescue people from their houses. They rescued dogs and cats and children and neighbors, including Thomas’ fifth-grade teacher.

CHAVIES, Ky. — For the last few days, Jennifer Myers and William Duff have used her father’s pickup truck to get to their jobs at a nursing home, but he needs it back soon to get to his own job, and they’re not sure ...Read More