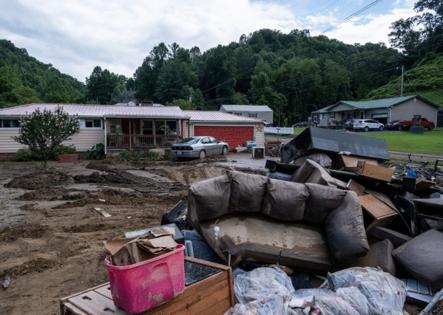 LEXINGTON, Ky. – Hot summer temperatures will return to some of the Eastern Kentucky areas devastated by deadly floods this week, prompting a new safety concern for the state as residents attempt to cleanup their communities – some doing so without any power.

According to the National Weather Service, temperatures in Eastern Kentucky will reach the mid 80s to around 90 degrees Fahrenheit Wednesday and Thursday. However, the added humid air mass will make it feel much hotter, up above 100 degrees in certain locations.

“That is now our new weather challenge,” Gov. Andy Beshear said during a Tuesday morning update. “Areas that are devastated, that we’re still getting power to some places, are going to be dangerously hot.”

The National Weather Service advised that people be mindful of the heat while working outside. Some signs of heat exhaustion are dizziness, thirst, heavy sweating, nausea and weakness. Symptoms for heat stroke are confusion, dizziness and unconsciousness.

To combat the heat, state officials are opening up a number of cooling centers across the region.

“We may, for the first time, be ahead of the weather,” Beshear said Tuesday after announcing the cooling centers. “That’s not hubris, we know anything can happen, but this is pretty exciting.”

Beshear said areas that don’t have cooling centers “most likely” have power restored and will have air conditioning. Power outages in Kentucky had eclipsed 20,000 amid the flooding, but that number has since been reduced to less than 9,000 outages, according to poweroutage.us.

Beshear said officials are bringing in lots of bottled water and it will be available for people who need it.

“I know you may be out there working to salvage whatever you can, but be really careful Wednesday and Thursday when it gets hot,” Beshear said. “We’re bringing in water by the truck loads. We’re going to make sure we have enough for you, but you’re going to need a cool place to take a break, if not to spend part of these days.”