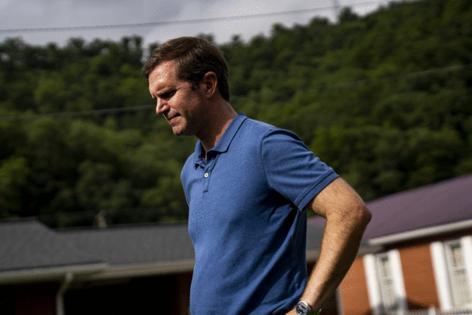 HAZARD, Ky. — Four days into the flooding disaster after record rainfall in Eastern Kentucky, Gov. Andy Beshear said the state and region are still in rescue and recovery mode to find missing people and identify the dead.

The number of confirmed deaths from the flooding grew throughout the day Sunday.

At a news conference at the Perry County Courthouse on Sunday morning, Beshear confirmed that 26 Kentuckians had died in the area as a result of flooding. There are bodies, he said, that officials are still processing and will be for days to come.

The number grew to 28 confirmed deaths in an update by Beshear Sunday evening.

Shortly after that, the Perry County deputy coroner confirmed that four additional bodies had been found there on Sunday, raising that county’s total to 7 deaths. One additional death reported by the coroner in Knott County Sunday night would raise the statewide death toll to 33 in last week’s historic floods.

“This is the most devastating and deadly flooding event in my lifetime. …” Beshear said. He described the victims as “children of God that will be missed by their community and are loved. We are going to be there with those families as they grieve,” he said.

Local officials are still working to identify missing people with many coming into nearby police stations to bring pictures of loved ones they have not heard from.

Beshear said there is no way to confirm an exact number of those who are missing right now.

“In between still-spotty cell phone service and getting back up and running, we are not having a firm count to begin with,” he said. “This is something we will be working on for weeks to come.”

LEXINGTON, Ky. — A good bit of Appalachian history and arts got soaked in the record flooding in Eastern Kentucky.

In Whitesburg, water may have breached the vault at Appalshop, where the arts and media collective ...Read More