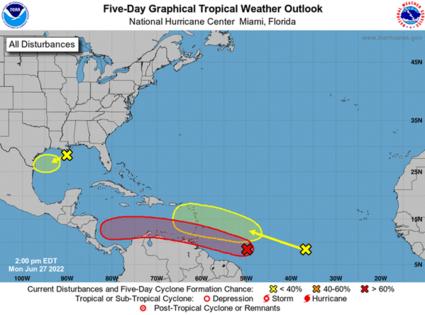 ORLANDO, Fla. — The National Hurricane Center has issued a tropical storm warning for what it’s calling Potential Tropical Cyclone Two approaching the southern Windward Islands, one of three systems with a chance to form into the season’s next tropical depression or storm.

The National Hurricane Center’s 8 p.m. advisory Monday said heavy rains and tropical-storm-force winds are likely to begin late Tuesday for islands in the Southern Caribbean. The system is currently located about 670 miles east of Trinidad with maximum sustained winds of 40 mph moving west-northwest at 18 mph.

A Tropical Storm Warning is in place for Trinidad and Tobago as well as Grenada and its dependencies, and tropical-storm-force winds extend outward up to 60 miles from the system’s center. If it becomes named, it would be Tropical Storm Bonnie. The NHC gives it a 90% chance for formation in the next five days.

By Friday, it could become the season’s first hurricane before making landfall in Central America.

Meteorologists are also keeping their eyes on two other disturbances with odds of becoming a tropical system.

The NHC continues to track a trough of low pressure that has created an area of disorganized showers and thunderstorms from southeastern Louisiana across the northeastern Gulf of Mexico and the southern part of the Florida peninsula. The NHC gives it a 10% chance of forming into a tropical system in the next two days, or 20% in the next five days, as it slowly drifts west across the northern Gulf of Mexico.

Another is a tropical wave several hundred miles southwest of the Cabo Verde Islands, producing disorganized showers and thunderstorms. Atlantic conditions could become ripe enough for the system’s development into a tropical storm in the next several days. The NHC gave the wave a 20% chance of developing in the next five days.

If any of the systems develop, they would be the season’s second system after Tropical Storm Alex, which dumped nearly a foot of rain over parts of Florida earlier this month.

After Bonnie, the next two names would be Colin and Danielle.

A massive cloud of Saharan Desert dust that spent a week crossing the Atlantic is being blamed for changes in the skies off South Carolina and Georgia in recent days.

The cloud first hit the southern tip of Florida on Aug...Read More

There’s almost no chance for the tropical wave in the Atlantic Ocean to develop into a depression, according to forecasters.

As of 8 a.m. Thursday the disturbance in the Atlantic has a near 0% chance of developing in ...Read More

LEXINGTON, Ky. — President Joe Biden pledged during a trip to Kentucky that the federal government would be in the state for the long haul to help people in damaged communities recover from historic floods.