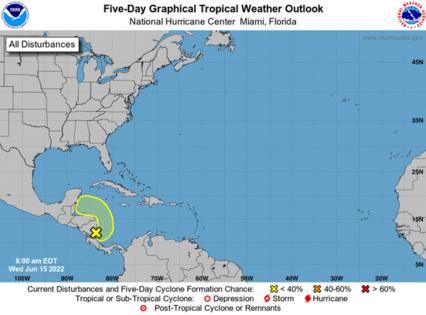 Satellite images and radar show the presence of an area of low pressure in the southwestern Caribbean Sea. Still, the NHC lowered the odds of the disturbance to a 20% chance of developing into a tropical depression or storm in the next two days and a 30% chance in the next five days, according to the 8 a.m. update.

On Tuesday, NHC hurricane specialists put the odds at 30% and 40% between the next two to five days.

The disturbance, which was first identified Sunday evening, is still forecast to slowly develop this week if it remains over water, the NHC said. It is also expected to drift near the coasts of Nicaragua and Honduras and move northwest.

If the system develops into a tropical storm, it will take on the name Bonnie.

Earlier, the first storm of the year developed into Tropical Storm Alex, which formed from the remnants of the first Pacific storm of the year Hurricane Agatha, which passed over Mexico and into the Caribbean. After, the remnants shaped into what specialists called Tropical Cyclone 1. It later pushed large flood waters through South Florida while passing through the state and developed into Alex on June 5 after TC1 moved into the western Atlantic and soon fizzled away.