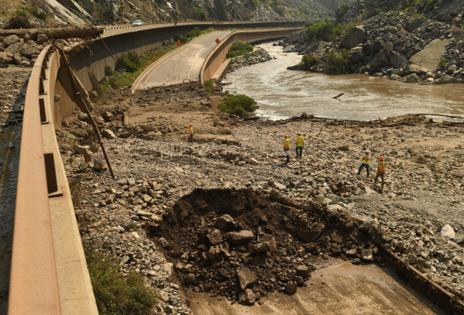 DENVER — When rain falls, if it does, Colorado faces a rising risk of flooding, mudslides and rockfalls — like those that closed Interstate 70 last year — due to an “expanding bull's-eye” of barren, scorched and less-stable terrain.

And Colorado officials say everybody will need flood insurance and other protection — not just residents living in federally designated hazard zones.

“If burn scars are larger, the rainstorms that happen every summer are going to be more likely to hit a burn scar,” Schumacher said.

The state’s increased vulnerability to floods and slides as terrain changes “is a risk that people need to be aware of,” Schumacher said. “There’s been so much focus on drought in recent years, for good reason. People may not be thinking as much about the risk of flooding.”

This week and next, National Weather Service forecasters are anticipating rain and scattered severe thunderstorms. The first couple of weeks of June typically bring the craziest storms, though meteorologists say severe weather and flash flooding can happen throughout the summer. This year, precipitation from winter through late May remained relatively paltry.

Major floods scouring Colorado’s semi-arid landscapes — triggered by heavy rain and hail — historically ranked among the worst disasters. The biggest floods hit Pueblo in 1921, Denver in 1965 and the northern Front Range (Big Thompson River) in 1976. Most recently, floods in 2013 swept down from mountains and across plains along the South Platte River into Nebraska, destroying 1,800 structures and causing damages estimated by the insurance industry at $4 billion.

And accelerating erosion led to havoc last year when heavy rain on July 29 triggered the destruction of I-70 in Colorado’s Glenwood Canyon — where destabilization after the Grizzly Creek Fire in 2020 prompted a visit from the chief of the U.S. Geological Survey who warned of “very high potential” for catastrophic slides — costing an estimated $116 million and closing I-70 for two weeks.

Traditionally, trees, shrubs and other vegetation reduced erosion and stabilized slopes so that Colorado could withstand heavy rain and hail.

“But as you have less vegetation cover and soil — as it gets drier — you expect to see greater amounts of erosion,” said Karen Berry, director of the Colorado Geological survey. “And, we find that the types of rainfall we get have been changing due to climate change,” tending to be “more intense” when storms hit, Berry said.

FORT LAUDERDALE, Fla. — Air traffic delays and cancellations continued throughout the state Saturday afternoon, including at all three major airports in South Florida.