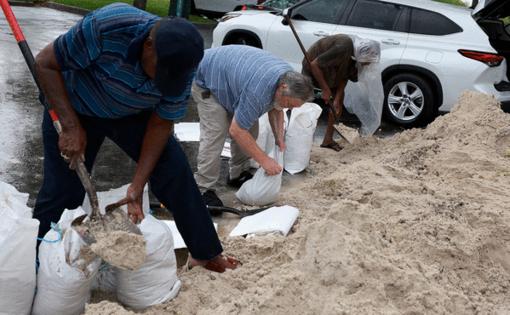 Clearly, the storm isn’t done yet, despite losing its tropical characteristics Monday afternoon.

“There is kind of like a tail; we call it a trailing trough,” said Sammy Hadi, a forecaster at the National Weather Service’s Miami office.

Parts of Miami-Dade and Broward counties were put under a flood watch Monday, just days after heavy rain swamped South Florida. As of 7:45 p.m. Eastern time, most flood advisories had expired but additional flooding could occur this week, according to forecasters.

As the disturbance crossed Florida, dropping up to 14 inches of rain in some spots, it dragged a line of moist air behind it, which can make it easier for more rainstorms to form.

“It’s not going to be a washout all the time, but it looks like the peak will be midweek,” he said.

Hadi also warned that the additional rain on already rain-soaked soil is bound to lead to more flooding in some spots in South Florida, hence the flood watch.

“This week, because our soil is so soggy, it won’t take much rain to have flooding,” he said. “Even if it’s just a regular afternoon storm, the soil is already saturated.”

Tuesday could be the soggiest day this week. The forecast calls for a 72% chance of rain in Fort Lauderdale and 71% in Miami.

Forecasters say the wet weather this week will run through the weekend.

FORT LAUDERDALE, Fla. — Air traffic delays and cancellations continued throughout the state Saturday afternoon, including at all three major airports in South Florida.

LOS ANGELES — After a cool and cloudy weekend, Southern California can expect to see the heat return next week, particularly in inland, valley and desert areas, forecasters say.

The heat wave will likely be the hottest ...Read More