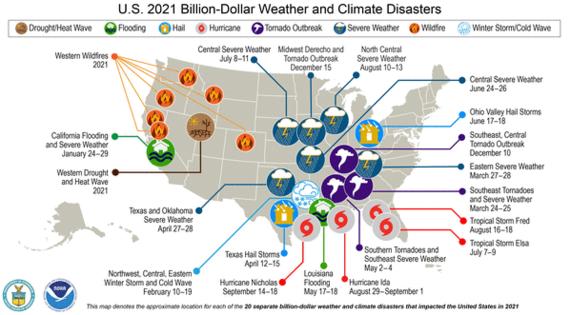 The year 2021 was marked not only by extreme weather events nationwide and in the West — it was also the Earth’s sixth hottest year on record, federal officials announced Thursday.

The planet’s average land and ocean surface temperature last year was 1.51 degrees higher than the 20th-century average, the National Oceanic and Atmospheric Administration said in a new report. A separate analysis from NASA also concluded that 2021 was the sixth warmest year on record and tied with 2018.

Experts from both agencies said the global warming trend was being driven primarily by greenhouse gas emissions.

“It’s clear that each of the past four decades has been warmer than the one that preceded it,” said Russell Vose, chief of climate monitoring for the NOAA National Centers for Environmental Information. “Of course all of this is driven by increasing concentrations of heat-trapping gases like carbon dioxide.”

Last year was the 45th consecutive year that saw global temperatures rising above the average, meaning that the planet has not had a colder-than-average year since 1976, according to the report. What’s more, the years 2013 through 2021 all rank among the 10 warmest years since record keeping began in 1880.

“The punchline here is, it doesn’t really matter how you do the analysis — they all tell you the earth has warmed quite dramatically over the past century,” he said.

The United States overall fared even worse than the globe, with 2021 ranking as the fourth hottest year on record in the contiguous U.S., according to NOAA.

Many of the acute warming effects were felt in the West, where exceptional drought, extreme wildfires and simmering heat waves coincided with California’s hottest summer on record.

A heat wave in the Pacific Northwest in June shattered all-time high temperature records in Washington and Oregon, while the Dixie fire, which sparked in July in Plumas County, California, went on to become the second largest wildfire in the state.

LEAVENWORTH, Wash. — Do you have any extra space? Would you like some snow? Leavenworth might be in touch.

The faux-Bavarian alpine town on the eastern slopes of the Cascades was still struggling to dig itself out ...Read More

There were twenty disasters ...Read More