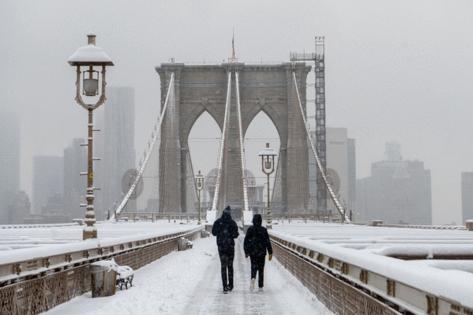 The storm, which stretched from Virgina to Maine, dumped upwards of 5 inches (13 centimeters) on New York City before tapering off by midmorning. In Boston, where school is canceled, heavy snow is expected to last through the afternoon.

Government offices in Washington were closed after 2 to 5 inches fell there, according to the Office of Personnel Management’s website.

“It is snowing pretty good now in both New York City and Boston,” said Marc Chenard, a senior branch forecaster with the U.S. Weather Prediction Center in College Park, Maryland.

The storm was moving up the mid-Atlantic coast, where it had already contributed to 2,199 flights being canceled across the U.S., according to FlightAware, an airline tracking service. More than 1,100 of those were from airports in Washington, New York and Boston.

The Long Island Rail Road was beset with delays, and Metro-North trains were operating on a Saturday schedule across northern areas of New York City and Connecticut. New Jersey Transit reported some trains were delayed.

Although New York roads were mostly empty of cars as the snow fell on Friday morning, officials said the main thoroughfares were cleared for commutes and for kids to go to school. Still, a number of subway lines were experiencing delays, and the Staten Island Railway and Metro North were switched to special schedules.

During a morning press briefing, New York Mayor Eric Adams urged parents to send their kids to school despite “the criticism from those who think differently.”

The storm hits as the New York Department of Sanitation, which plows city streets, is missing about a fifth of its workforce as coronavirus cases surge.

“Plan for a snow day,” commissioner Ed Grayson said at the press briefing.

There aren’t any additional storms lurking over the horizon for now, Chenard said. Saturday will be sunny in New York with highs reaching 37 degrees Fahrenheit (2.78 degrees Celsius) in Central Park.