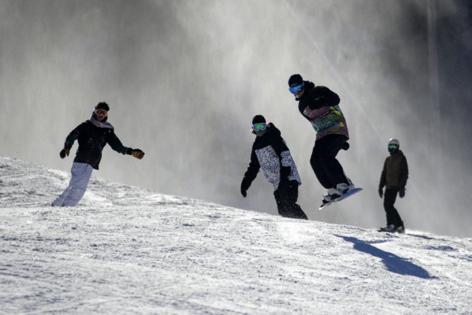 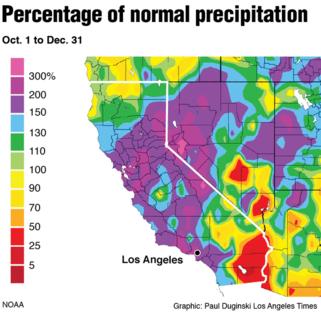 LOS ANGELES — The dusty hills of Griffith Park are sprouting shades of green. In Pasadena, water is streaming through arroyos that only weeks ago sat caked and dry. And from the perfect vantage point downtown, the distant San Gabriel Mountains are gleaming with crowns of snow.

After one of the driest years in recent memory, Los Angeles — and California — is off to a notably wet start this water year. The state received more precipitation in the final three months of 2021 than in the previous 12 months, the National Weather Service said.

Statewide, 33.9 trillion gallons of water have fallen since the start of the water year, which runs from Oct. 1 through Sept. 30 to accommodate for the wet winter months and the springtime runoff. That three-month tally has already surpassed the previous water year’s 12-month total of 33.6 trillion gallons. By comparison, Lake Tahoe holds about 40 trillion gallons.

“It’s been a great start to the water year,” said Cory Mueller, a meteorologist with the weather service in Sacramento. “Most areas have already seen what they saw last water year and then some, just in the three months we’ve had.”

But while all that moisture gave a much-needed boost to statewide drought conditions, Mueller and other experts emphasized that California will need to maintain this wet trend in order to truly climb out of its dry spell. The 2021 water year was California’s driest in a century, and more than half of the state’s water years since 2000 have been dry or drought years.

“Not getting paid for three months and then getting a normal paycheck doesn’t put you back to normal in your bank account,” said Noah Diffenbaugh, a climate scientist at Stanford University.

The same is true for California’s drought.

“Those [precipitation] deficits have been so pronounced through so much of the state that it will take more than one normal year to overcome, and we don’t know how this year will ultimately play out,” Diffenbaugh said. “That said, it’s a very encouraging start.”

There have, indeed, been some promising improvements.

The U.S. Drought Monitor map — which has long indicated severe, extreme or exceptional drought conditions in most of California — looked slightly less worrisome after the early storms.