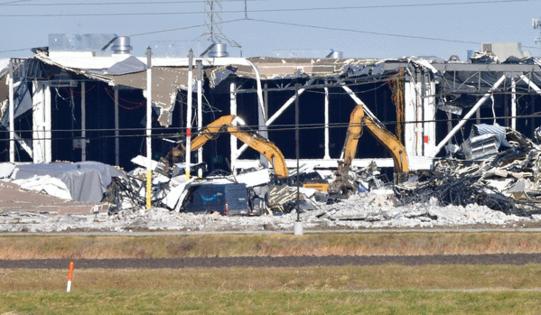 But the EF3 tornado that wrecked the facility near Edwardsville, Illinois, last month — one of several twisters that caused widespread damage in six states and more than 90 deaths — could be a sign of things to come.

While most people associate intense tornado outbreaks with spring, weather experts say both the timing and location may be changing.

Two decades ago, December tornadoes — if they occurred — plowed through fields and homes from eastern Texas to northern Florida, according to data from the National Oceanic and Atmospheric Administration, or NOAA. At that time, fewer storms occurred overall, and even fewer hit the nation’s traditional “tornado alley” — Kansas, Nebraska, Oklahoma and Texas. Recent unseasonable twisters tend to touch down in Mississippi, Alabama, Arkansas, Tennessee, Missouri, Illinois and Kentucky.

Scientists and those who study the phenomena agree that tornado outbreaks are moving east.

“Research has identified evidence of a ‘Dixie Alley,’ which represents an eastward extension of the traditional ‘Tornado Alley’ in the central Great Plains,” wrote Harold Brooks in a 2018 study on tornado spatial trends. Brooks studies tornadoes in NOAA’s National Severe Storms Laboratory, and said St. Louis has one of the most remarkable tornado histories of any place in the country.

In general, tornadoes are not happening more often — except in December. Professors and experts offer several reasons.

Tornadoes need two main ingredients: Warm air, and rapidly changing winds at different levels of the atmosphere, known as wind shear. Geographies with recent bursts in December tornadoes often have wind shear, William Gallus, professor of meteorology at Iowa State University at Ames, Iowa, said, but not the warm air that causes atmospheric instability. That’s when a parcel of air is warmer than surrounding air, at the same elevation, causing the parcel to rise.

He and colleagues were shocked by the dew points produced in Memphis and Kentucky in the recent tornado-causing systems. The one that passed through Iowa on Dec. 15 broke the record for single-day tornadoes in the state, Gallus said. And that system produced tornadoes in parts of the country that previously had no December tornadoes.

A link between climate change and an increase in extreme weather seems natural to some, such as Gallus. A warming planet means an often-warmer Gulf of Mexico, he said. Disturbances in the jet stream can result and can spur tornadoes — especially in December.