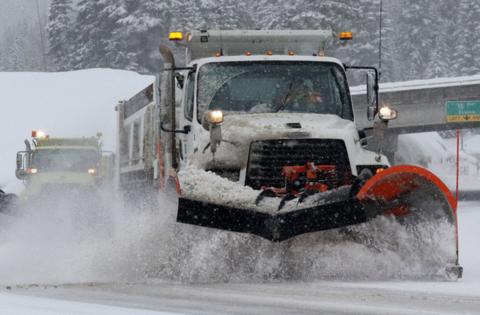 The flakes will fall as showers, creating “highly variable snow accumulations” across the region, says the National Weather Service. Hills will likely get more than lowlands.

The Seattle-Tacoma area was projected to receive less than an inch Saturday night, followed by an inch Sunday and at most another inch Monday. That makes for tough sledding, compared to the 9 inches that came during a stretch last February or 20 inches that landed in February 2019.

An overnight shift to northerly winds means highs of only around 30 degrees Sunday. Meteorologist Steve Reedy said the roads could be icy early Sunday, but that sleet and freezing rain are unlikely.

Temperatures will drop to as low as 20 degrees by Monday night, and there is a slight chance of snow again midweek.

Snow was falling in Seattle and just outside the city on Saturday afternoon, while higher elevations. Communities farther north in Skagit and Whatcom counties were getting deeper amounts. Bellingham already had a blanket of snow by late Christmas afternoon and the temperature had dipped to 19 degrees. That area will pick up another 2 to 4 inches Sunday, said Mary Butwin, weather service meteorologist.

Port Angeles and the north Olympic Peninsula could find themselves catching up to 8 inches of snow, as the cold air is “enhanced” by passing over the Strait of Juan de Fuca, and then the mountains trap wet clouds over the coast, Butwin said.

The Washington State Department of Transportation expects to pre-treat major highways with salt compounds to prevent buildups in urban areas, said spokesperson Tony Black. In Snoqualmie Pass, he said, crews have been available to sustain 24/7 plowing as of this past week, despite a state and national shortage of road workers.

WSDOT entered December with at least 110 fewer workers than the normal 1,500 who work on the front lines as equipment operators, avalanche technicians, supervisors and mechanics. The agency has shuffled and retrained workers to keep up, but warns of possible snow-clearing reductions as winter rolls along.

While the snow may not last, the colder temperatures will linger into the week.

“We may start to dry out Sunday and into next week. Unfortunately the colder air does remain in place through midweek,” Reedy said.

Monday is expected to be the coldest day of the week, with daytime temperatures in the mid 20s and nighttime lows around 18. The daytime highs will rise during the week, eventually creeping back up into the upper 30s by Thursday.