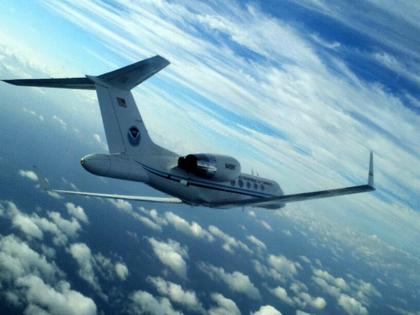 All three are affectionately named after Muppets characters. The P-3s are Kermit and Miss Piggy. The G-IV with the big nose is obviously Gonzo.

The team will have to make room in the garage for a new Gulfstream 550.

The NOAA had been targeting the acquisition of a new aircraft since 2019 and had original plans for it to be active by 2022. Now, the team will have to wait a couple more hurricane seasons before it’s ready to officially join the team, said NOAA Aircraft Operations Center spokesperson Johnathan Shannon.

“We are continuing to work with Gulfstream on integrating the desired instruments and weather modifications and now expect delivery in time for the 2024 hurricane season,” Shannon said.

The incoming G-550 baseline, or green, aircraft is expected to cost $40.7 million.

Just which Muppet the new aircraft will be named after has yet to be announced, but there’s plenty of time before the NOAA gets its hands on it.

The G-550 will be outfitted with weather technology such as real-time Doppler radar, dropsondes capabilities, enhanced sensors and space for wing pods to mount cloud sensors, Shannon said. It will also be tailored to carry up to 14 crew and mission systems operators, including flight directors, meteorologists, hurricane specialists, and engineers.

The aircraft will be flying between 43,000 and 49,000 feet at Mach 0.8 for nine-hour missions to explore hurricanes, tropical storms and atmospheric rivers, all while doing so with that new aircraft smell — something perhaps that has been long missing in the NOAA’s fleet.