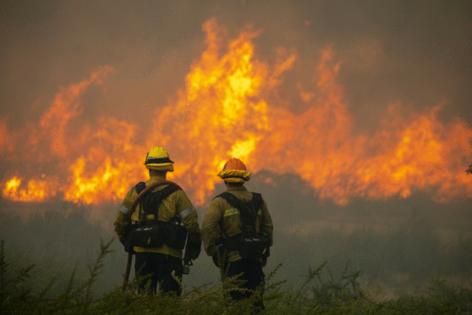 LOS ANGELES — Strong Santa Ana winds and low humidity throughout Southern California are expected to taper off by Monday, but another system will blow through the region starting Wednesday and linger for a gusty Thanksgiving morning on Thursday.

A red flag warning went into effect at 9 a.m. Sunday and will expire at 3 p.m. on Monday, which will coincide with a wind advisory, according to the National Weather Service. The current Santa Ana wind event whipping through the Los Angeles basin is forecast to peak on Sunday.

Wind gusts could reach 55 mph in parts of Los Angeles, Ventura and San Bernardino counties. Forecasts show isolated winds in canyons and higher elevation passes of up to 60 mph. Gusts reached 70 mph in the San Gabriel Mountains early Sunday morning, the weather service reported. Wind gusts will begin to taper off heading into Monday, about 10 to 15 mph less than Sunday, forecasters said. Humidity throughout most of Southern California will bottom out due to the strong winds, reaching the single digits in some parts of the basin, including Anaheim, San Bernardino, Riverside and Lake Elsinore. This will create critical fire weather conditions with dry brush ready to ignite.

"Areas in a Red Flag Warning will have an increased risk for fires with rapid spread, long range spotting, and extreme fire behavior, especially considering the dry fuels in place across the region," the weather service said.

The red flag warning will stretch from Santa Barbara across Los Angeles County and into Orange County and all along the coast. Tuesday will see a break in wind gusts for most of the region, but they are expected to start up again by Wednesday afternoon, according to the National Weather Service.

"By late Wednesday morning or early afternoon, we start to see another Santa Ana event that goes through at least Saturday and will reach its peak in the evening or Thanksgiving morning," said Stefanie Sullivan, meteorologist with the National Weather Service in San Diego.

This week's Santa Ana event is forecast to be weaker than the winds that whipped through the region on Sunday. It's still too early to tell if conditions will require another red flag warning, but without any rain in the forecast it's likely to be a dry holiday break next week.

Temperatures in the L.A. basin will reach the low 80s on Sunday and begin to taper off starting Tuesday but are expected to heat up again starting Thursday. Conditions are warmer and drier than average. Moving into December, forecasts show above-average temperatures for most of Southern California and a low chance of rain, according to the weather service.