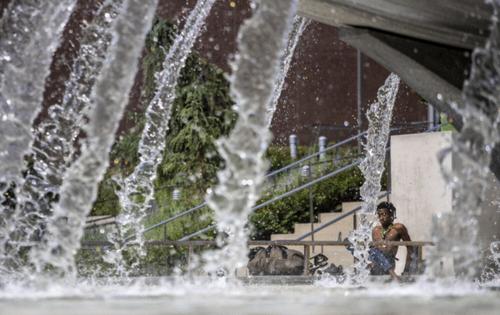 LOS ANGELES — California could become the first state in the nation to institute a ranking system for heat waves, much the way weather authorities categorize hurricanes, or how fire and air quality officials warn of wildfire and pollution risks.

The move, announced on the last day of the United Nations climate talks in Scotland, is intended to raise awareness of the deadly effects of extreme heat events, which experts say kill more people than any other climate-driven hazard and are increasing in frequency and intensity as the planet warms.

"Without a way to rank heat waves, we treat extreme heat more like a weather story when it's really a public health crisis," said California Insurance Commissioner Ricardo Lara, who will sponsor a bill to develop the ranking system. The bill was jointly sponsored by Assembly members Luz Rivas (D-North Hollywood) and Eduardo Garcia (D-Coachella), who plan to introduce it after the Legislature reconvenes in January.

"There are a lot of vulnerable people, especially the elderly, that stay in their apartment, they're not informed, they don't know what the risk is, and they end up dying because either they don't have an air conditioner or they may hesitate to run their air conditioner because they can't pay the electric bill," Rivas said. "And we can't continue to let that happen and not be prepared."

The announcement comes after a Times investigation revealed that heat probably caused about 3,900 deaths in California over the previous decade — six times the state's official tally — and that the undercounting has contributed to a lack of urgency in confronting the crisis. The effects of these worsening heat waves fall disproportionately on the poor and communities of color, the series found.

It also comes on the heels of a report by Lara's climate insurance working group that recommended the ranking of heat waves in order to warn communities and encourage policymakers to craft prevention strategies and risk-reduction measures.

"Heat is the silent killer. How can you solve it if people don't know about it and understand it?" said Kathy Baughman McLeod, director of the Adrienne Arsht-Rockefeller Foundation Resilience Center at the Atlantic Council and chair of the Extreme Heat Resilience Alliance. The global coalition of cities, nonprofits, scientists, companies and government agencies, of which Lara is a member, has been developing a worldwide standard for naming and ranking heat waves and recently announced that Seville, Spain, would be the first city to adopt it. Athens is also considering doing so, Baughman McLeod said.

Though the California bill will only propose ranking heat waves, it's possible that the state could also consider a system of naming heat waves in the future, the legislators said.

The state could also adopt other ways of dealing with the escalating heat, including appointing a chief heat officer to coordinate its response as the cities of Miami and Phoenix have done. Most recently, Los Angeles also announced it would take this step, with the City Council on Wednesday greenlighting a motion by Councilmember Paul Krekorian to create the position.

"It's imperative that the city have a detailed plan in place to address this ongoing climate catastrophe," Krekorian said in a statement.